Chester Pike aka the Chester Darby Turnpike freed from tolls 100 years ago!! 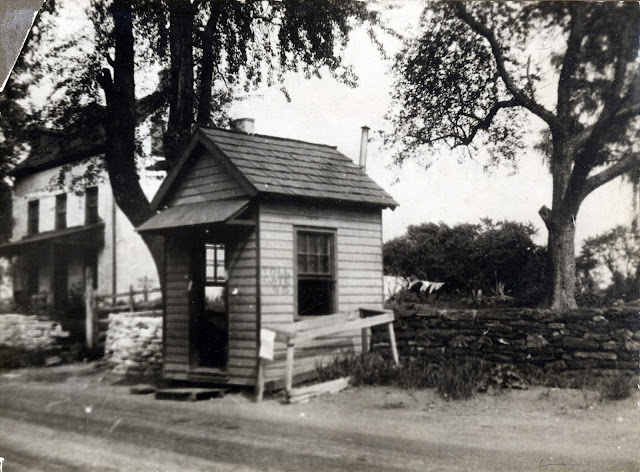 This is a picture of Toll Gate #5 on Chester Pike. All the tollgates were on the south side of the pike. Does anyone have an idea where this toll gate stood, at what intersection?

NOTE: When I first became interested in local history some 50 years ago, it was hard to imagine Chester Pike as a turnpike or toll road.  Almost everyone I talked to back then, remembered when Chester pike was a toll road. They told me stories of beating the tolls and how bad the road ws till the state took it over. This year is the 100th anniversary of Chester Pike being freed from tolls.

Officially Freed From Tax at 12:15 Today by Big Demonstration

While the Chester and Darby Pike was not officially freed from tolls until 12:15 o’clock today, as a matter of fact the last money collected on this ancient highway occurred at 11:05 o’clock.  At that hour George C. Hetzel, president of the toll gate company, sent official word over the te3lephone from toll gate No. 1 to Harry J. Adams, who has had charge of toll gate No. 6 at Sharon Hill not to accept or collect any further tolls and to dispatch this word with all possible haste to the intervening gates between Sharon Hill and Leiperville.  Toll gate keeper Adams collected his last money at 11:05.  It was three cents and was paid by a citizen who desired to go but a short distance down the pike.

The official party from Media, after witnessing the signing of the check for the releasement of the road, arrived at Sharon Hill at 12:15.  Governor William C. Sproul, whose ambition it has been for years to have the tolls abolished was the first time to alight from the automobile.  He tacked his sign on toll gate No. 6.

“Our hats are off to Robert J. Buckley, James M. Hamilton and Thomas F. Feeley, Delaware County’s progressive commissioners, who freed the Chester Pike from tolls.

While the Governor was driving the four tacks to hold this important notice in place, his photograph was taken.  Immediately following this, Hon. Thomas H. Garvin, chief clerk of the House of Representatives, tacked his sign on the same toll gate:  “Free Highway; Pay No Toll.”

This was signed by the State Highway Department.

Twelve automobiles brought the official party from Media.  At Sharon Hill they were joined by at least thirty more machines in which were seated officials and prominent citizens of the county.

The machines were then formed in line and started down the pike, the car carrying Governor William C. Sproul, J. Barton Weeks, head of the Pennsylvania Automobile Club, Charles R. Long of the Chester Times, and Dr. Charles A. of the Viscose Company of Marcus Hook, leading the procession.

Burgess Farrell of Sharon Hill and a large delegation of citizens, welcomed the official party when they reached Sharon Hill.  Harry J. Adams of Darby was the man who carried the official notice from President Hetzel to the toll keepers along the pike that the hour to cease collecting tolls had arrived.

As the final edition of the Times goes to press, the speeches and other festivities are being held at Eddystone, to be followed by luncheon at the Chester Club.

At each of the toll houses freedom bells were rung and crepe was hung on them.

At Ridley Park, No. 2 toll gate was loaded on one of Headley’s large trucks and hauled to the scene of the speaking at Eddystone.

Posted by Delaware County History at 2:38 AM