Old names for some Delco Creeks, A new booklet and October Events!!! 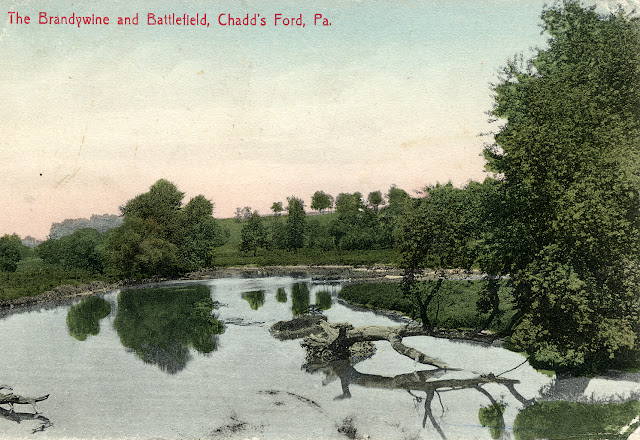 A view of the Brandywine Creek from about 1910. The exact location is unknown.

Back in the very old days Delaware Countians took a swim in Amosland kill, went wading in Calkoen Creek, fished for croakers in Mill Creek, and went boating on the Crooms.  And the Lenape Indians sailed birch bark canoes on the Meechoppenackhan.

Today there aren’t any Indians on the Meechoppenackhan but there are modern canoes on the Chester River, boats on Crum Creek, fishermen in Cobbs Creek and waders and swimmers in Darby Creek.

Practically all of the county waterways were known by other names during the early years.  Following are the stories of the old names and accounts of how the streams got their present-day titles.

The proper Indian name for Chester Creek was the tongue twister – Meechoppenackhan.  Translated, this name meant “the large potato stream” or the “stream along which potatoes grow.”  The Okehocking Indians, a tribe of the Lenapes, owned most of the land along the creek.

Whether they raised the potatoes or whether they grew wild the records do not show.  However, the name would hardly be applicable today since the banks of the Chester River aren’t renowned for their potato bearing qualities.

The present name of the river seems much more appropriate.  It was obviously named for the city although there is no record of any formal naming date.  Opinion is that common usage affixed the name.  Today, however, there is still some discrepancy.  Officially it is the Chester River although many persons insist on calling it the Chester Creek, the name by which it was known for years and years.

Cobbs Creek, which forms the eastern boundary of the county separating it from Philadelphia, was known as Mill Kill or Creek in the early days of local settlement.  The name Mill was given because the Swedish water mill built by Governor Printz in 1643 was located on its banks.

When the English settlers moved in, the name Cobbs was given.  It seems the name was derived from William Cobb who owned a large tract of land along the banks of the creek.  In 1683 Cobb was appointed by the court at Chester as constable for “Amosland and Calkoen Hook.”  These sections are now Ridley Township and Folcroft.

Darby Creek had then old names, Mill Creek, Calkoen Creek and Amosland Kill or Creek.  It was later named Darby for the township and borough located along its banks.  Originally the creek was considered a branch of Cobbs Creek despite the fact that it is a much larger stream.

One county stream that still retains its old name is the Muckinipattus.  This stream starts in Springfield Township, flows through Upper Darby and the northern segment of Darby Township, then through Glenolden and then forms through Glenolden, and then forms the boundary between Norwood and Folcroft.  The name is undoubtedly of Indian origin although there is no record of what the odd title meant in Lenape Indian language.

Stoney Creek was most probably named by everyday reference.  A common name for a creek the title was probably descriptive, although not too exclusively, of the many stones in the creek bed.  Stoney Creek also starts in Springfield Township and flows through Ridley Township and Ridley Park.

At the other end of the county is the Brandywine.  There are three theories on the origin of the name of the historic creek on whose banks one of the decisive battles of the Revolutionary War was fought.

The first story tells about a vessel laden with “branntwein,” or brandy that was sunk in the waters of the creek.  Thus the name – the creek with the “branntwein” in it – Brandywine being a corruption of the original name.

Another explanation says that the name was applied because “the slough near Downingtown discharged its muddy waters into the creek tinging it the color of brandy.”

The third theory is that the name was given for a man named Andrew Braindwine, who once owned land close to the banks of the mouth of the creek.

Ridley Creek was undoubtedly named for the same reason Ridley Township and Ridley Borough were named.  The name was taken from the English home of John Simcock, one of the area’s earliest settlers.

Crum Creek was believed to have been named by the early Swedish settlers and Crum is believed to be a man’s name.  Records show that the name was originally spelled Croome and that the present name is a corruption of that. 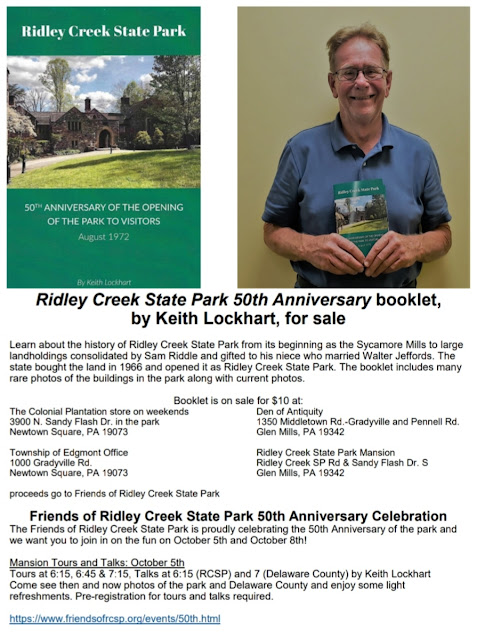 Posted by Delaware County History at 4:57 PM No comments: 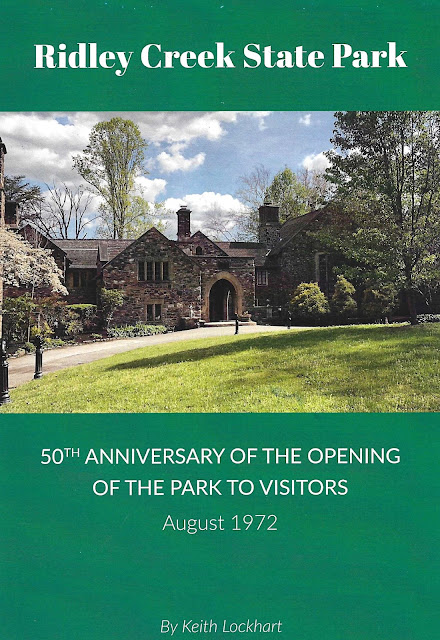 The cover of the new booklet on the history of Ridley Creek State Park. About 5 months ago Jack Miller, president of Friends of Ridley Creek State Park asked me to write a little booklet on the 50th Anniversary of the park's opening. The booklet could not have been done without Jack Miller's  assistance. Jack knows everything about the park!! The book will go on sale Tuesday!!

NOTE: The park property was purchased in late 1966 by the state of Penna. The park had been the estate of Walter Jeffords since the 1920's. Samuel Riddle's niece married Jeffords and Riddle bought numerous farms and gave them to Jeffords as a wedding gift. Jeffords also added to the property of some 2000 acres.

One of the largest sales of real estate to one individual buyer that has been recorded in Delaware County in years took place when George T. Butler, representing Samuel Riddle of Glen Riddle, purchased three farms, 430 acres in all, in Edgmont Township.  Benjamin T. Levis of Media, acted as broker in the sale.

The three farms, which are located on the highest point in Delaware County, commanding sweeping views in all directions, were owned by the following:  James Patchel estate, 147 acres; Edgar C. Howard, 112 acres; William J. Neal, 170 acres.  The consideration is withheld with the exception of that on the Patchel property, which sold for $11,019.  The new owner will transform his new holdings into a spacious estate, on which it is expected that he will erect a home in Hunting Hill in the near future.  For years the three farms have been the scene of many an exciting finish of the Rose Tree, Radnor and West Chester Fox Hunting Clubs, which used them as their hunting territory.

George Addis, of Knowlton, has sold his farm of seven acres to Thomas W. Redding of Chester, who will move into his new place in the early spring.

Acting as broker, Benjamin T. Levis sold the brick dwelling and two acres of ground at Upland belonging to I.M. Hidgskinson to Louis Sapovits of Chester.

In Glenolden J.W. Meckert & Co. started the erection of a bungalow on Glenolden Avenue, near the Philadelphia, Baltimore and Washington Railroad station, for W.H. Harrison.

Ground has been broken by Milton L. Staley for a residence for John D. Abel of Philadelphia on Cook’s Avenue, near Chester Pike, Glenolden, who will occupy it when finished.

Workmen are putting on the finishing touches on the Twentieth Century Club at Lansdowne, which will probably be completed within a few days.

The residence of Harry Stewart, Windemer Avenue, Lansdowne, which is being changed from a single to a double house, is almost completed.

J.W. Meckert & Company of Ridley Park, have obtained the contract to erect a stone and framed dwelling house for J.H. Parsons on Park Street, above Morton Avenue, Ridley Park.

Mr. and Mrs. Shoemaker of East Lansdowne are negotiating for a suitable site in East Lansdowne, on which they will erect a home, probably early next spring.

The estate of Charles Leeds at Ridley Park, about 120 acres in all, it is said, has been purchased by a syndicate.  The tract will be divided into building lots.  The property is located between Chester Pike and Darby Creek, on which place it has a frontage of more than 2000 feet.

Elmer Ellsworth Pierce has closed negotiations for the sale of the M.H. Matlack Stock Farm in Willistown Township, south of Paoli.  The purchasers are William H. Jones & Brother of Sixty-Ninth Street.  The consideration has not been disclosed.

The Matlack farm contains 240 acres with Ridley Creek flowing through it.  It has a frontage of over 3000 feet along the West Chester and Philadelphia trolley road, and is known as one of the show places along the pike between West Chester and Philadelphia.  The farm has been retained in the Matlack family for the past eight years, having been purchased by Jonathan Matlack in 1829.  There is much activity in farm sales in this section, over 600 acres having changed hands within the past ninety days.


Posted by Delaware County History at 7:11 AM No comments: