How Police work was done in Delaware County 100 years ago. 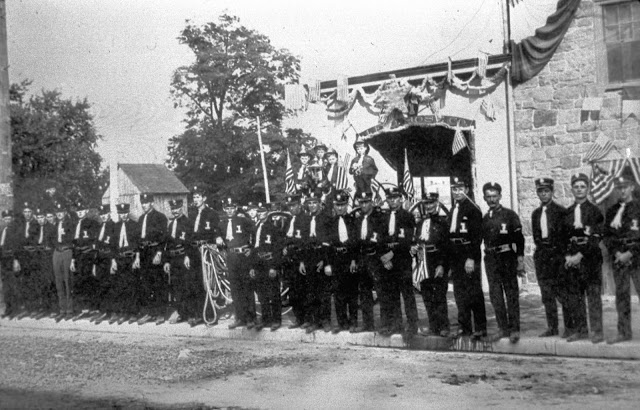 The James F. Dougherty Fire Co. in the 1300 block of Chester Pike, this fire co. later became the Vauclain Fire Co. The picture is from about 1915. The one room building on the far left in the background is the first headquarters for the Ridley Township Police Department.

Note: Police work was very different in Delco 100 years ago. Officers worked on foot, directed traffic and when in a hurry stopped cars to get a ride.

Police in Delaware County 100 years ago

It is hard to imagine today what being a police officer in Delaware Co. was like in the 1920’s. Police patrolled on foot, no cars allowed, some towns allowed horse patrol at night. In Ridley Township which is as big as it is today, they had only one police officer in the early 1920’s. He walked the entire township and would stop cars and ask for a ride if he had to get somewhere fast. In those days a officer usually worked a 12 hour shift, usually 7pm to 7am and they would be on call during the day. In some towns, police were required to punch in at a time clock at night at various stops to prove they were patrolling. Towns built small booths where officers could rest while on patrol and also check in by phone. One of these booths can be seen in Ridley Park at Chester Pike and Sellers Ave. today. It is not a toll booth as some think. Small booths like these could be seen everywhere in Delaware County years ago. Police had no radios then and they would call by phone or stop back at the station to see if they had any calls. Some departments had a police phone system in their township of boro. These phones were placed at various intersections and locked and police had keys to use them. Some of these call boxes can still be seen in Delco. Officers were usually required once an hour to call their station to see if they had any calls.  In other towns in Delco an officer would ask a friend or business if they could use their phone to call in.

As eastern Delaware County was growing rapidly, police calls came in faster, but by the time an officer found out about a robbery, theft etc. the bad guys were long gone. With robbers using cars and police on foot catching criminals was almost impossible.

Another problem was traffic control. When traffic lights first appeared in the 1920’s, for the first couple of years they were operated by hand usually by police. In Darby Boro at Chester Pike and Main St. was a small booth that was torn down some 20 years ago. It was built for traffic control and also a place an officer could stop to rest and get out of inclement weather. A number of police officers were killed trying to enforce traffic laws. The police chief of Norwood was killed when he ran out onto Chester Pike and tried to stop a speeding car. He was hit and killed and the car kept right on going.

It all came to a head in Ridley Park one day.  The boro was being hit hard by burglars and by the time the police found out about the crime and got there they were long gone. The burglars were so brazen they were robbing houses during the day. An officer on foot had no chance to make an arrest. But one day that all changed when an officer was in the station when a call came in that burglars were breaking into a house on West Ridley Ave. The officer was on foot and had no way to get there but to run. Ridley Park Boro had it’s own car for boro business and the officer grabbed the car keys off the Mayor’s desk and jumped in the car. He drove to the house and caught the burglars in the act. Boro residents were thrilled the burglars had finally been caught, but boro council wanted to fire him for taking the boro car without permission. After numerous hearings and meetings the officer was reinstated and Ridley Park became one of the first towns to have a police department with cars. The rest of the county followed quickly.

But even with cars police still had to call their station at a phone station or stop in to learn what calls they had. The good news came in 1943 when Delaware County created their police radio system!


Posted by Delaware County History at 3:20 AM