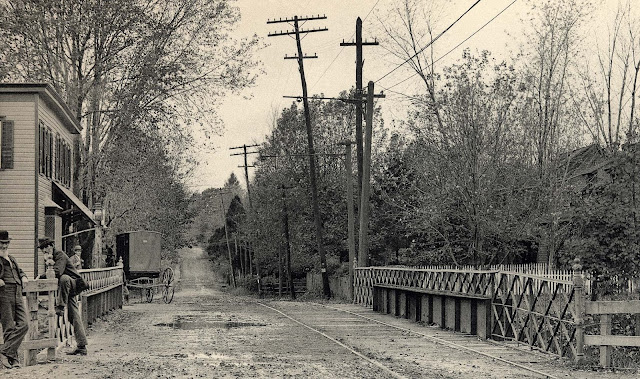 A picture of Providence Rd. aka Route 252 from 1897 during rush hour. You are standing at Possum Hollow Rd. looking north toward Media. The house on the left is still standing and the bridge is over the West Chester R.R. local line.

Note: A little history lesson on early Delco and where the township names came from. Lots going on this month for Black History Month please check the events

Delaware County became a separate political division on September 26, 1789, by an Act of the State Legislature which provided for cutting off the eastern part of Chester County, to create the new county consisting of 21 townships, with Chester as the county seat.  The earliest settlements in Pennsylvania were made in the part which is now Delaware County, but they were not organized as townships until William Penn took over the government of his Province.

Before Penn received his grant of land, Upland Court had jurisdiction over all of the land from Christina River to the Falls of Trenton.  This was called Upland County, a name which was changed to Chester by William Penn in 1682, probably because many of the settlers there had come from Cheshire in England.  At first Chester was the name of one of the three original counties laid out by Penn.  Later, the name was also given to a township, the first one organized under Penn’s government, and finally to Chester Borough in 1701.

Many of Penn’s followers had bought land before leaving England, intending to pick out their tracts after they arrived in America.  Some settled near the river, but many went into the country back from the river and built homes in the wilderness.  Ne plantations were laid out as fast as surveyors could mark boundaries.  Emigrants who knew each other or had the same religious beliefs, stayed together if they could.  In time, a name was chosen for a community by the whole group of families, or by someone looked up to as a leader.

A township was officially recognized when the people living in the area elected a constable or a tax collector, or presented a petition for official action or approval in such matters as laying out a road or building a dam.

Some township and village names were chosen because they reminded the settlers of their old homes.  For instance, Darby was named for Derbyshire; Edgmont, also written England, was named by Joseph Baker, an early settler, for the town in Shropshire from which he came; Birmingham, originally spelled Birmingham , was the English home of William Brinton, the first settler in the township.

Thornbury was named by George Pearce for his wife’s old in Gloucestershire; Aston or Ashton, was at first called Northley, then Aston by Edward Carter, an early settler, for the town in Oxfordshire from which he came.  Radnor and Harford, or Haverford, in the Welsh Tract were names brought from Wales by the settlers.  Haverford means “confluence of two streams.”  Newtown, though not in the Welsh Tract, had many Welsh settlers and may have been named for a Welsh town of the same name, or from the townstead in the center.

Ridley was the name given by John Simcock in 1682 to his large tract of land north of Amosland, to honor his home town in Cheshire.  When the township was organized, it was named Ridley, Springfield, at first called Ridley-in-the-Woods, was named from a fine spring on the farm of George Maris, an early settler.  In Marple, the early settlers were English and the township may have been named for the English parish Mar Poole, but it is not verified.

Chichester, the name of an English town, was the name given by William Penn, at the request of some of the residents, to the settlement called Marcus Hook, when he granted a charter in 1701.  The township was organized as Chichester but the townspeople continued to call it Marcus Hook.

Middletown was so named because it was supposed to be the central township in old Chester County.  This was a mistake, but it is well-named for Delaware County.  Tinicum, too, is well-named.  The name is derived from Tennakonog, an Indian word meaning island.

Bethel and Concord were known as Concord Liberty until the two townships were organized.  Concord was a name chosen to denote the feeling of good will among the settlers there.  Bethel means House of God.  It was chosen to show the holy purpose of the settlers.  The name Providence was given to express gratitude for a safe journey.

These 21 townships, all settled and organized before 1688 constituted the whole territory of the county when it was first made a separate county.  They will exist as municipal districts but their area has been reduced by the formation of Chester City and 27 boroughs.


Posted by Delaware County History at 3:19 AM