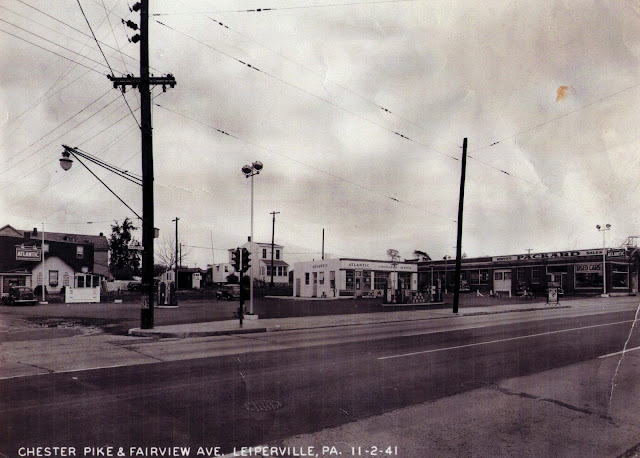 A picture of Chester Pike at Fairview Rd. looking northeast. Notice the Packard Car Dealership at Hollis Ave. This picture is labeled Leiperville although the area was taken over by the Crum Lynne Post Office in 1884.

Note:The Leiperville Post Office was established in 1829 by Samuel Leiper who named the post office after his family who had mills and quarries close by. The post office closed for unknown reasons in 1872 and in 1884 a new post office opened named Crum Lynne. The name comes from "Crum" Creek and "Lynne" means lake or waterfall. Crum Lynne was the original name for Ridley Lake. The western part of Ridley Park became known as Crum Lynne because of the golf course and the newly established Crum Lynne Railroad Station a name the railroad selected. The new name Crum Lynne upset many Leiperville residents who still used the old name Leiperville. When I first became a Ridley Township Police Officer some old residents still called the town Leiperville. The article below is from 1901.

WHAT’S IN A NAME IF LEIPERVILLE WILL DO

Shall the Ancient and Historic Nomenclature Remain?  That is the Question Now

It is to be Leiperville or Crum Lynne is the paramount question that is agitating the residents of that portion of Delaware County lying between the Leiper Mansion and Crum Lynne Station, along the line of the Chester Pike.

The agitation was started a few weeks ago by Howard J. Smiley, who wrote a communication to the Chester Times questioning the propriety of the name of Leiperville and suggesting that Crum Lynne the name of the post office which is located in the heart of Leiperville, be permanently substituted.

With a view of ascertaining the sentiment of the leading citizens of the place in regard to the agitation and which name was really preferred for the historical hamlet, a reporter of this journal interviewed a number of the prominent people on the absorbing topic yesterday afternoon Supervisor James F. Dougherty – “This place was founded by the Leiper family, the members of which were among the most patriotic people in the country.  General Leiper was among the few who escorted General Washington from the field of battle, and he was the organizer of the first Philadelphia Revolutionary troops. I fail to see why there is a desire among the residents, particularly the old-time residents to have the name Leiperville dropped in favor of Crum Lynne.  For one I am opposed to the proposed change.  By all means let the name Leiperville remain.”

School Director J. Miller Quinn – “It does not make a particle of difference to me what they call the place.  For all I care they can call it Horntown.  Let me say, however, that the firm with which I am connected has the title Crum Lynne printed on their letterheads, etc., on account of the post office being of that name.”

Daniel McKinney, the barber –“Leiperville is good enough for me.  I was born here and the name suits me to a T.”

Jon Springer, manager of Mrs. EM. Feeley’s grocery store – “It seems to me that the place should be called Crum Lynne, on account of the post office bearing that name.  Personally, it makes no difference to me what name is used, although if the tow names in question were put to a vote, I believe I would select Crum Lynne.”

Posted by Delaware County History at 4:02 AM