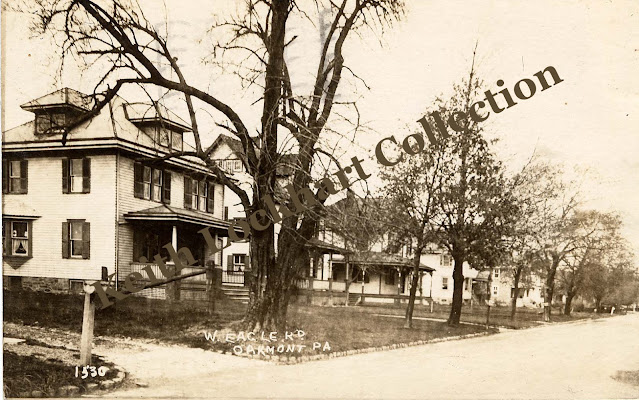 This is a rare picture of the Oakmont Section of Haverford Twp. from about 1915.   This is West Eagle Rd.

NOTE; This is a funny one. I have no date on this article from the Chester Times but it is probably the mid 1920's. America was going thru a big change after WW1 as the last of the Victorian Era met the "Roaring 20's". Dancing, short shirts and that all important "walking" you date home!! No kissing in Haverford Twp.!! and please walk fast or you will be arrested!!

Such was the advice given yesterday by Chief of Police Scanlin in issuing an order that all persons on the streets after the trolley cars stop running, shortly after midnight, must give an account of themselves to the police.

Should a young gallant be surprised in the act of kissing his little flapper by a coarse, burly policeman, he mustn’t get mad.  Not only must he answer the cop politely, but shades permit the policeman to accompany himself and the flapper to her home.

“The order is not meant only for lovers who let the hours slip past”, declared Scanlin.  “It is meant for everybody.  I figure that few people are there after the cars stop running.  The order is primarily an effort to prevent crime.  If a man halted by a policeman says he has been visiting friends and has missed the last car, he must accompany the officer back to his friends’ house and prove his words.

Young men and girls on the streets at 1 o’clock in the morning must file an account of themselves.  If they have homes to go to they will be accompanied there by the policeman.  If they give only vague replies, they will spend the night in cells in the police station.  The cells are clean and airy.


Posted by Delaware County History at 3:25 AM