Fire company members and their "ornaments" 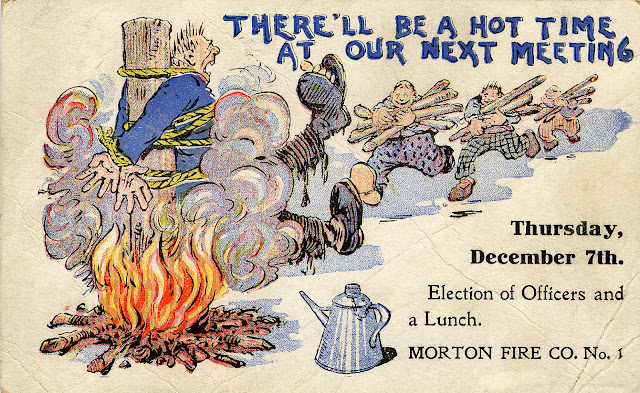 The above postcard from about 1910 was sent to members about an up coming election of officers for the Morton Fire Co. Many Delco Fire Cos. had problems in the early days prior to 1920.

Note: Prior to 1920 most Delco Fire Cos. equipment was pulled by hand and everyman over the age of 18 was expected to be an active member of their local fire department. At this time most twps. and boros were small in population and many men worked in Phila. Men who were in town during the day were important. It was not unusual for fire cos. to call the local school during a fire asking for junior members for help. Of course some local men considered their fire co. a mens club and were not real members, just "ornaments". I deleted the name of the fire co. in the article below.

One Fire Cos. Problem

If you want the name of being a fireman and belong to the fire co., you must be an active fireman and not an ornament, and if you want to be the latter and belong to the fire company, then it will cost you $5 a year.  This has been decided by the Fire Company, with the result that three would-be firemen or ornaments have resigned from the company.

The Fire Company has since its organization, earned the reputation of being one of the best equipped fire companies in Delaware County, besides its firemen have done yeomen work at all fires in the borough so much so that there has not been a disastrous fire in the borough for many years.  But this has been due because the firemen have already been active, with few ornaments which seemed to have developed during the past year.

Several months ago, the firemen in the company that is the active firemen, began to grumble because a certain number of men who were on the active list did not appear at drill night practice, and absented themselves on the nights when the fire equipment was to have been cleaned.  This was finally brought up in open meeting, and the result was that the president of the company, appointed a committee to investigate the delinquent members.  The result was that the committee reported back that twenty firemen were on the list who had failed to assist in cleaning fire equipment, or who had been absent from drill nights.  After this report was made another committee  was appointed by the President.  This committee also made a similar investigation and it reported back to the fire company that it would be unable to punish the delinquent members, but it did advise that the by-laws be changed so they could be associate members if they did not desire to be real firemen.  This would mean that all persons who had failed to comply with the requirements of active firemen would have to either be active or become associate members, and this would, of course, also mean to be an associate member.  It would cost $5 annually instead of $1 per year, which the active firemen pay.

The President when interviewed said that it was true that there were members in the company who were on the active list, and who had been very inactive which resulted in the real firemen of the company putting up a kick against the drones.  He said that if any of the members wanted to be ornaments, they could do so by becoming associate members and paying $5 per year, if not they must be active.  He admitted that the trouble caused three resignations and he said that the “house cleaning” was a good move and that there would be more active work done by the firemen.  He said there is always plenty of work to be done after each fire, such as cleaning up the machinery and re-charging the chemical tanks.  “Some of the firemen like to go to fires, but they do not like to clean up when they return from the fire,” said the President.