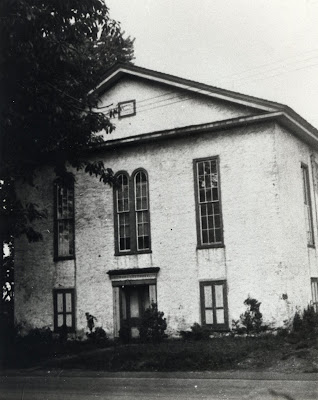 If you drive thru  "5 Points" in Village Green, Aston Twp. you see this building. If has a history of being the home of 2 churches, etc. Today the building is a business at 5130 Pennell Rd. This picture from the 1940's shows part of the church building.

Note: Every old building has it's secrets and this building at 5130 Pennell Rd. was the home of 2 churches.  On August 18, 1860 Joseph Baker of Aston sold [X2-295] for one dollar a lot of 6,504 square feet to the trustees of the Village Green Methodist Church.  Those trustees were: Samuel Barton M.D., Stephen Hall, George Van Zant, James Baker, Simeon Cotton, Nathan Howatt, Abram Blakely, William Guthwait and Harvey Barton.  “ that they shall erect and build thereon a house of worship for the Methodist Episcopal Church”. This church was an off shoot of Mt. Hope Church over an argument among the congregation to repair Mt. Hope Church or build a new church.  Services were held here for five years, when the property and church was seized and sold [U2-516] by Sheriff Caleb Hoopes on November 13, 1866 to Richard S. Smith of Phila.  On June 1, 1869 Joseph and Olive Baker of Chester sold [X2-507] to Richard S. Smith of Phila. and Rev. William Ely of Middletown $100.00 a lot of 2,143 square feet in Aston Twp. at Pennell Rd. with buildings and improvements. The church was seized for a debt of $317.00. The deed [U2-516] states the church was a two-story stone building and on a lot 45 by a depth of 50 feet. On June 8, 1871 it was sold [C3-345] to Sallie K. Crozer for $2,000.00 by Richard Smith and William Ely of Middletown.  The property contained a “certain stone church” lot size unknown.  On January 30, 1873 Sallie Crozer sold [H3-218] for one dollar the church and lot to the “Delaware County Baptist Mission”.  For the next ten years the Crozer Theological Seminary of Upland held a mission here. More ground was added and a parsonage and wagon sheds were erected.  Village Green Grange bought the property in May of 1914.

Below is a article, from Chester Times on August 5, 1914 when it became the "Village Green Grange"

The members of Village Green Grange will dedicate their new $12,000 hall on the Mount Alverno Road, at Village Green on Thursday evening, an elaborate program having been prepared for the special occasion.  The committee on arrangements comprises the following officers of the Grange:  Master George, D. Armstrong, Secretary L. D. Pancoast and Lecturer Florence Pancoast.

The program that has been prepared for the occasion includes addresses by State Grange Master William T. Creasy, A. G. C. Smith county superintendent of schools, John G. MacSparron, Past State Grange Lecturer, who represented the Pennsylvania Granges in Europe last year to study the question of farmers’ credits, and Mr. Durnall, who has charge of the Swarthmore college farm.  It is also expected that large delegations will be present from Bethel, Brookhaven, Concord, Birmingham and Newtown Square Granges.

The Village Green Grange’s new building was formerly the Village Green Baptist Church property.  The building, which is constructed of stone, was extensively remodeled at a cost of about $1,000 and the present value of the structure, which occupies a tract of ground 150 by 300 feet, with spacious shed in the rear for the accommodation of carriages and automobiles is estimated at $12,000.

The Village Green Grange, which has a membership of about one hundred and fifty, is nearly ten years old.  The regular meetings are held on the first and third Thursday nights of the month.  The Delaware county Farmer’s Institute will meet in the new hall during next February.  A course of lectures will be given on that occasion by prominent Grangers.  The Village Green Grange also proposes to hold a corn show in the hall in November.  The annual excursion of the Grange will be given to Augustine Beach on Thursday of next week.  A new piano has been ordered for the new Grange Hall.

Posted by Delaware County History at 3:50 AM