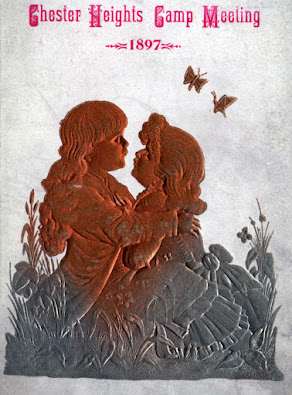 This Chester Heights Camp Meeting booklet from 1897 shows one of the reasons why the camp was so popular!

Note: I totally missed the date that Chester Heights Boro was 75 years old. Pat Smith, Aston Historian pointed it out. Chester Heights was part of Aston Twp. till September 21, 1945 when it became a boro.

Unless the engine slips a cog, and the possibility of this is very remote, The Gospel Train, loaded with a hand of Christian workers of the Methodist Church, will arrive here on Wednesday next for a ten days’ stay for the purpose of saving souls.  This vanguard of the Master will be in charge of Dr. George M. Brodhead, who has had charge of the camp meeting at this popular place for several years past.  Succeeding a popular worker like Dr. Burwell, Dr. Brodhead has had a hard time, but his work has been so satisfactory to those who have charge of the grove that he has been selected to lead the Christina Ship of State for another year.

Of course, things are moldy, inactivity in the winter months’ being responsible for this, but the cobwebs are being removed, and the place given a scene of activity.  I have been wondering in this connection, if the old canvas which has furnished a covering for the worshippers for years is again to be used, with its thousands of mildewed spots.  Of course, this is not material to the saving of souls, but giving up the good things which have been bestowed upon the people of these grand United States and particularly in this section of the country, from which the patronage to this camp is drawn, it is necessary to make the sinner more comfortable than the Christian.  The latter is used to hardships for the sake of the grand, good cause in which he is working, but, on the other hand, the sinner comes as a visitor, and if the surroundings are not inviting to him, it may be hard to keep him in touch with the things that are spiritual long enough for the good men and women who are engaged in the work of bringing person in Christ, to show him the evil of his ways and get him to travel in the straight and narrow path.

THINGS HAVE CHANGED – With all credit to the good people who are entrusted with the success of this camp meeting, it is not what it used to be.  Ministers in former years, as a means of divine worship, sanctioned their parishioners going to Chester Heights on one of the two Sundays during which the camp is held.  Today things have changed.  On the other hand, it is openly stated from many pulpits of the church that it is not the right thing for members of the different churches to leave their own places of worship to seek moral and spiritual recreation in their labors for the Lord in this beautiful grove.  Why this is so, has often been asked, but up to date the question has not been answered.  It is true that the old-time spirit of Methodists, which invaded the hearts of the good men and women who came here in former years, is not present in the actions of many present-day Christians.  This may be due to modesty.  Be that as it may, the place has become more of a place for some persons who enjoy the season of hot weather in the country, many of whom have attended the meetings. In former years there was scarcely a family who occupied a cottage or tent who was not an active worker for the good of the camp, and assisted in every way to promote its usefulness in the direction in which the church intended that it should be – the saving of souls.

There are many things which may be attributed to this.  There are few “Billy” McCrackens left; few Joseph Parkins; few of the Congiations, who formerly made the old woods ring with their sincere shouts for the Master and sent forth His praises to the world at large in old-time Methodist hymns.  The amens of such men as Uncle George Drayton, Jesse Gore, and others are not heard from the old benches which have seen service for many years.

People are just as good today as they were at any time since the beginning of the world, but there are but few genuine old-time camp meeting goers left in this section of the country.  True, no better or more feeling singer can be found than Mrs. Fitch, who has brought tears to the eyes of many a Christian and sinner alike, but Mrs. Fitch sings the later-day hymns, and by the time the passengers on the spiritual train here get accustomed to the words and tine, the old bell in the tower of the tabernacle sounds the end of things.

THE MEAGER FACILITIES – Another obstacle is the way of the large attendance of the people of Delaware County and other places is the meagre facilities to reach the place.  Some years ago, when special trains were run to Chester Heights, it was worth one’s life, almost, to get a foothold on the steam conveyance.  People talked of “going to camp in advance, and every country boy and girl prepared to dress up in their best “bib and tucker” to appear at the camp meeting.  Today, no trains are run on Sunday except those on the regular schedule, one in the early morning and returning at night.  This condition, it is true, is due to a petition sent to the railroad company by the managers of the woods some years ago, but I have no doubt but what the good men who are entrusted to make a success of the camp have seen the fallacy of this for some time past.

It is agreed by the sinners and many of the saints that it would be less harmful to take the people to Chester Heights on Sunday, either by special or regular trains, than to have the attendance cut down, and have thousands spending their time to playing ball or some other amusement when, if the traveling facilities were adequate and convenient, many of these persons would be found sitting under the beautiful shaded tree listening to a good sermon and assisting with the singing of the good old-time hymns.  It is the consensus of opinion that less harm would be done and the Sabbath desecrated to a less degree if the people could be gotten to Chester Heights on the Sabbath during the continuance of the camp meeting.

Many were of the opinion that the camp meeting of 1905 should be inaugurated, a trolley line would have been constructed in close proximity to the grounds, which would have furnished means for those desiring to attend to get there at a minimal cost.  Every person who has an interest in old Chester Heights is not fortunate enough to own a horse and carriage, and, indeed, many of the working people are not blessed with sufficient of this world’s goods to hire a carriage to reach the camp, and are not able to reach the early morning train which runs there, having no servants at home to do their work.

THE SUNDAY ADMISSION – Teams are admitted to the camp ground on Sunday, for which there is a charge, and many cannot see the difference, between this than persons being given the opportunity of paying their fare, on the train to reach the grove.  Of course, it is the duty of every law abiding citizen to obey that Commandment, “Six days shalt thou labor” and do all thy work,” etc., and to rest on the Sabbath, but if every man, woman and child in the world obeyed the Commandments there would be no need for camp meetings or places of worship, for the world would be perfect, and many preachers would be out of a job.  Give the people a chance to get to Chester Heights without so much difficulty, and the old woods will not be large enough to accommodate the people who will attend.  Indeed, on Sundays it will require several leaders to conduct the meetings.  In former years overflow meetings were a necessity, and it will come to this again, if the proper facilities are given the public of reaching the place.

Last year the Chester Praying Band, which for years held forth at the entrance to the woods, was missed very much.  I have seen these good men and women march down to the main tabernacle, after holding an interesting meeting, followed by at least five hundred men and women, who crowded the accommodations afforded for the main meetings.

While Dr. Brodhead has not completed his program of ministers who will be here during the entire camp, he can say that some of the best divines in the Methodist Conference will be here to expound the gospel.  There will be no lack of singing this year, and all of the meetings will be in charge of competent persons.

THE DAILY PROGRAM – There will be the usual sunrise meeting in charge of Rev. Samuel Kohr; the 3:30 praise meeting; the regular preaching service at 10:30 o’clock; children’s meeting at 10 on the hill; preaching at 3 o’clock; Young People’s meeting at 6:30, and preaching again in the evening, with experience meetings and song services on various days.  Many old timers are expected to be present at the love feast on Sunday morning following the opening of camp.  Some of the experiences given at this meeting are worth coming miles to hear.

Nearly all the cottages have been taken; the grounds have been cleaned up, and everything points to a successful ten days’ meeting.

The Colonial Pennsylvania Plantation invites you

to a French and Indian War Encampment and Skirmish Saturday, October 10, 2020 11:00am—4:00 pm Become an eyewitness to history, as the Colonial Pennsylvania Plantation becomes the backdrop for scenes from the French and Indian War. It’s the French and British fighting for control of the frontier, and it is taking place on Saturday, October 10th . Watch the local militia lead by a Rodger’s Ranger as they discover a French raiding party and witness the skirmish which ensues. Visit the French and British campsites. Talk to the soldiers about their uniforms, weapons and strategy for fighting in the wilderness of the frontier. As you take in the action, remember that the French and Indian War determined not only the future of the Pennsylvania frontier but also events that put the loyal colonials on a path to revolution. There will also be demonstrations of hearth cooking, woodworking, and other everyday activities of the colonial time period. The Plantation’s hours are 11 am to 4 pm with the last entry at 3 pm. Skirmishes will occur at 12:00 and 2:15. Admission is $10 for adults, $6 for children ages 4 to 12. Children under age 4 are free. Members are free. Please purchase in advance by visiting www.colonialplantation.org. GPS Address: 3900 North Sandy Flash Drive Newtown Square, PA 19073

Posted by Delaware County History at 4:26 AM