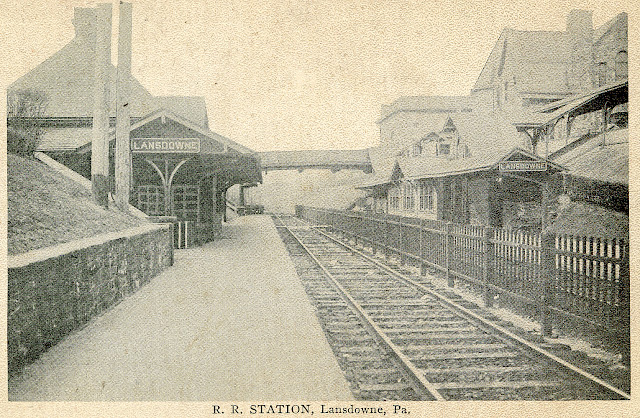 The original Lansdowne R.R. Station about 1910.

Note: When the West Chester R.R. line opened in the late 1860's it created and added to " small" country towns in Delco. Prior to 1920 western Delco was farms and small country towns. This description of some of the towns from Lansdowne to Media from the 1880's gives an idea of what it was like.

Lansdowne to Media 140 years ago

When the West Chester R.R. Line was new

Lansdowne, or the old Darby Road Station, is about three-quarters of a mile below Fernwood.  It has undergone many and striking improvements in the last five or six years.  The railroad house at the station has been enlarged and improved, and the grounds more neatly arranged.  Fine summer residences have been recently built here and the surrounding acres much beautified.  Joel J. Baily, the Philadelphia merchant, has a fine summer residence at Lansdowne, and nearby is the residence of Mr. Samuel Harlan, of the shipbuilding firm of Harlan & Hollingsworth.  Messrs. James P. Scott, the son and Howell W. Bickley, own and occupy handsome villas and about a mile and a half further south, towards Darby, is “Woodburn,” the summer residence and park of Colonel Scott, where he died in May last.  Mr. Harry Peale, of the firm of Thomas A. Biddle & Co., stock brokers and Rene Guillou own properties at Lansdowne.  Ten acres of the Dunk property, nearby, have just been purchased by a Philadelphia gentleman, for a thousand dollars an acre, most probably for immediate building purposes.  Real estate near Lansdowne brings from one to two thousand dollars per acre.

Kellyville is a small station further west.  There are several fine residences nearby, and a number of valuable bustling properties, principally woolen mills.  A new shoddy mill, the property of Sellers Hoffman, is in course of erection.

Clifton proper has been increased by the addition of a number of houses, one or two churches have been built, and the place wears a thriving, prosperous look.  Here are the Glenwood Mills, owned by Samuel C. Lewis & Sons; the Clifton Mills by Randolph & Jenks and the Union Mills, by Thomas Kent.  Among the recent sales of property at Clifton were about twenty acres of land belonging Oborne Levis’ estate, to Wm. Longstreth of Philadelphia, for about $16,000.  Few building improvements or land sales have been made at Oak Lane recently.  Here is situated Dr. Given’s Inebriate Asylum.

Property is in demand at Spring Hill.  W. J. Howard, Esq., has just purchased a farm of fifty acres on the north side, near the station.  Mr. James D. Rhodes occupies a fine residence on the hill.  Many old time mansions and landmarks are to be seen hereabouts.

Morton station is conspicuous by reason of a handsome pressed brick railroad house, one of the neatest along the road.  Several buildings, principally private residences or annexes thereto, are being erected.  Thomas T. Tasker owns 600 acres here, with a fine residence and barn.  J. H. Irwin has just purchased 80 acres at Morton for about $300 per acre, and has erected a new hotel near the station, fitted up with has, &c.  At the time of his purchase Mr. Irwin owned 70 acres, nearly adjoining the new territory, and has a large machine shop there.  H. A. Bregoard is another large property owner at Morton.  He owns one hundred acres thereabouts, which he is daily improving.  Dr. Kingston Goddard, ex-Coroner of Philadelphia, owns a handsome property lying near the railroad.  The J. Edgar Thomson estate owns about 160 acres near Morton, fronting on the Delaware County Pike and near the railroad.  Handsome residences, built after the Swiss chalet style of architecture, adorn nearly all of the properties named, which have undergone vast improvement within a few years.  The old Morton homestead stands back some distance from the railroad station.

Swarthmore is the name of the next station on the West Chester Road.  The college is the most conspicuous public object hereabouts.  The spirit of improvement shows itself about the institution as well as generally along the road, and during the last two or three years important changes have been made, notably the long and broad sweep of pathway running from the railroad to the college building.

The high hill in the distance is dotted with several handsome new stone houses, the residences of a number of the college professors.  The West Hill Land Company has purchased two hundred acres adjoining the college property on the east.  Their acreage is all high and health land.  The company is effecting many improvements in the vicinity of Swarthmore. On the hill a large water works is being erected.  Thomas Foulke, Prof. Beardsley and S. Kent occupy fine houses at Swarthmore, and Sylvester Garrett is erecting for himself a valuable residence.  Nearly all the property lying hereabout belongs or originally belonged to the John Ogden family.  J. H. Linville, President of the Keystone Bridge Company, and President of the new Southern Maryland Railroad, has a fine residence on the south side of the road.  So also has Mr. Callender I. Leiper, of the firm of Leiper & Lewis, who own the stone quarries near Swarthmore, of the stone of which nearly all the new houses in the neighborhood are built.  An interesting relic of other days is built.  An interesting relic of other days is the old cottage on the college grounds, which was the birthplace and for many years the home of the painter, Benjamin West.  It is in the center of a small orchard, and has every appearance of age.  Real estate at Swarthmore ranges in value from $500 to $1000 per acre.  East of Swarthmore Charles Ogden has built tow handsome residences, and Henry Ogden has a fine residence on the Delaware County Turnpike.

Wallingford is distinguished for its many fine residences.  Directly opposite the station, on the north side, is the residence of Horace Howard Furness, Esq.   The mansion is very large and handsome.  Mr. Furness’ property embraces some 65 acres, and contains another residence besides that named.  Three acres were recently purchased by Mr. Furness at the rate of a thousand dollars per acre.  S. D. Hibbert has a handsome house with a new stable at Wallingford.  Among the other fine properties or new residences here are those of D. B. Paul, President of the Third National Bank; James Spear, the stove manufacturer of Philadelphia, who has just purchased thirty additional acres has just purchased thirty additional acres from Samuel C. Lewis; C. W. Godfrey, of the firm of Drexel & Co., who occupies a handsome stone house, with a tract of eighteen acres; Henry P. Dixon, of the firm of Thomas S. Dixon & Sons, who has just purchased nine acres of the Miskey property for $15,000.  Two acres of an adjoining property were recently sold for a thousand dollars an acre.  Louis Drake has eleven acres near Wallingford, with a modern style of house; Isaac Lewis, proprietor of the Wallingford Mills, has a farm of sixty-four acres, worth, it is said, $500 per acre; J. Howard Lewis owns six hundred acres fronting on the pike, which, at this point, is about a mile to the south of the railroad track.  Samuel C. Lewis, George C. Howard, J. Edward Farnum, ex-President of the West Chester Road, Isaac L. Miller and M. Kershaw own properties varying in size, lying at or near Wallingford.  Many of these properties front on the old Providence Road, which runs from Chester due north to Media.  This road was laid out by William Penn’s Commissioners in 1682, and many old line marks are still standing.  Nearly all of the properties named are undergoing improvements of some kind or other, and, with the growth of this popular station, proportionately increase in value.

From Wallingford to Manchester, and indeed to Media, are many desirable building lots, with high and healthy grounds, large water power from Ridley Creek, and many other local advantages.  Prices hereabouts range from $400 to $800 per acre.  One of the largest landowners near Media is Sam Bancroft, proprietor of the Todmorden Mills.  Several large sales of available building slots have recently been made in and about Media for good prices.

Along the line of the road, even as far as West Chester, the march of improvement is marked at times, but the chief improvement in recent years has been between West Philadelphia and Media.

Posted by Delaware County History at 4:30 AM