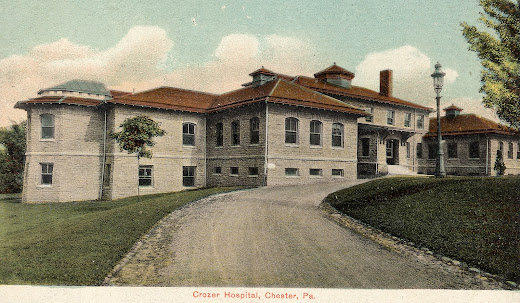 The Robert H. Crozer Hospital locally known as just "Crozer Hospital" about 1925. The hospital is in the same location today, 1 Medical Center Blvd. in Upland.

Dedicatory Exercises Held on Saturday Afternoon, Which Set Aside, for Public Use, Up-to-Date Accessory Provided by People’s Subscriptions

National Hospital Day, 1923, will go down in history as the accomplishment of a big achievement in the annals of the Chester Hospital.  The event on Saturday afternoon marked the inspection and dedication of the Robert H. Crozer Hospital and the now surgical wing made possible by reason of generous public subscriptions.

Hundreds of representative citizens turned out for the occasion, and not a single feature of the splendid new addition was missed by the throng of people.  Guided by members of the Board of Managers and members of the hospital staff, the visitors were shown over the buildings, every detail of equipment and facilities were fully explained, and every nook and corner was carefully explored.

The dedicatory exercises proper took place in the first floor ward of the new wing.  Special appointments in the way of seating, music and floral decoration were provided.

The gathering of men and women was presided over by Kingsley Montgomery, Esq., President of the Board of Managers, who first called upon Rev. Francis P. Maginn, rector of the Immaculate Heart Church, for an invocation.  Father Maginn responded as follows:

“We pray Thee God of Wisdom and Mercy to bless Thy people assembled here today to dedicate this building erected to alleviate human suffering.

“Bless, we pray Thee, him whose generosity of heart prompted the noble gift.  Teach us, Thy children, the lesson so necessary to know that not in ore knowledge, nor in the mental development that comes from education, but in virtue and strength of manhood that comes from the observance of Thy laws, shall be found universal security for the rights to life, liberty and the pursuit of happiness.

“Let the light of Thy Divine Wisdom direct the deliberation of our Government and shine forth in all proceedings and laws for the rule and government of our nation, so that they may tend to the increase of industry, sobriety and useful knowledge and may perpetuate to us all the blessings of equal liberty.

“Finally, O Merciful God, protect our beloved country.  Guide it ever in the way of peace; let it never forget its high vocation to teach all the nations of the world by word and example the principles of well-regulated liberty and reverence for the rights of men.

“Grant, O Lord, that our ship of state may sail on through all the troubled waters of the world, touching all earth’s human shores, and bringing liberty and opportunity and happiness to all earth’s suffering children.

State Supreme Court Justice William I. Schaffer, who was the legal advisor of the late Robert H. Crozer, delivered an interesting address.  Among other things, referring to the beneficence of the donor, which made possible the new addition to the hospital, Justice Schaffer said:

“The love of charity and the pity for human kind are the basis of all hospitals.  The good that men do lives after them, and so the good that Robert H. Crozer has done in providing this splendid addition to the Chester Hospital, will live as long as time.”

The princely benefaction provided for in Mr. Crozer’s will made in 1888, was the largest ever declared in this district by any person said the Justice.  When Mr. Crozer set aside $200,000 for a hospital to be built either in Upland or Chester, it was then thought than the sum was ample.  Mr. Crozer could not foresee the change in monetary value that has come to pass.  Large as the bequest was, it was not large enough to establish a hospital, so those of us who assumed the responsibility held on to the money and its earnings until a plan could be worked out that might meet the purposes Mr. Crozer had in mind.

“To the credit of the late George K. Crozer brother and executor under the will of Robert H. Crozer is due what has been accomplished.  He, it was, who asked that the benefaction be put at work.  Great problems are simple enough when you come to analyze them.  What we worked out was this:  The Chester Hospital Corporation owned ground and was operating a hospital.  We knew that the Crozer bequest was not sufficient to build and operate another hospital, so we said to the Chester Hospital Board of Managers, “If you will give us the ground in fee, we will build on that ground a hospital to be known as the Robert H. Crozer Memorial Hospital.  You give us a deed for the ground, and we will erect the hospital.  Then we will make a lease to you at a nominal rental per year for the term of ninety-nine years.

“The proposition was accepted, and the result is that the Chester Hospital was augmented to the extent of over $200,000 through the beneficent gift of Robert H. Crozer.  Although George K. Crozer has crossed to the Great Beyond, his memory must ever be linked with the achievement, for it was his courage and pleading that brought matters to a head.

“And now I dedicate this Robert H. Crozer Hospital and I present it to the Chester Hospital Board of Managers at the rental of one dollar per year for the period of ninety-nine years.”

Continuing, Justice Schaffer stated that the City of Chester and the country adjacent owed much to the Crozer family for the various monuments that testify their benevolence and good work done in this community.  Point to John P. Crozer, who was in the audience, Justice Schaffer stated that the matter Crozer guaranteed the gift made in his presence would be in line with his uncle’s wishes, were he alive.

A very concise speech was made by William Provost, Jr., who, on behalf of the board of Managers, accepted the gift.

Mr. Provost in his remarks told how that the Jackson fireworks explosion in 1882, was the incentive that eventually led to the establishing of the Chester Hospital.  How for ten years after a charter had been obtained, nothing tangible was done in the way of providing a hospital and how thirty years ago the institution became a reality, were recounted in detail by Mr. Provost.

“Only one of the original Board of Managers, Mrs. Broomall, and only two physicians that formed the first hospital medical staff, Drs. S. R. Crothers and Elen E. Brown, are now living.  For the year 1893-94 the expenses of the Chester Hospital were a little over $10,000, and 358 cases were taken care of, while last year there were over 2500 cases treated, and the cost of operating the institution was about $110,000,” said Mr. Provost.

He called attention to the gifts of the Deshongs, the Houstons, the Blacks and other large donations made from time to time.  He referred to the fact that at the close of the World War, the Chester Hospital found itself in debt to the extent of nearly $50,000, money borrowed at the banks.  He also recounted how a drive resulted in pledges aggregating $300,000, of which amount the usual percentage, incident to drives for money, has been paid.  There were 11,000 contributors, he said, and the money came from Chester and vicinity.  The money thus realized, was used to help bring about the institution now open for inspection, and he also said that there was enough money to pay cash for all of it.

A further acknowledgment of the great accomplishment was made by Rev. Francis W. Taitt, who in a happy manner and in words appropriate and timely, voiced the sentiments so well expressed.  The combination, he said, was a grand one and its great good would be a blessing on a larger scale for future generations.

Doctor Taitt stated the character of the people in any community is judged by the kind of buildings that are a part of the community, such as public and commercial buildings, churches, schools and benevolent institutions.  Hospitals were a necessary adjunct to every progressive city, he said, and the amount of good they accomplished could only be measured by the method of operation and the kind of support accorded them.  Deeds of love, he stated, surrounded in manifold form.  Speaking for the people of this community, I can but say that we feel grateful that Mr. Crozer should have thought of serving humanity in such an appropriate way as this institution will serve.  The contributions of the Houstons made it possible for the Chester Hospital to acquire such a good reputation in a surgical sense, and all the other generous givers are deserving of much praise and commendation.

By way of a little sally, the good-natured diving told a story.  A preacher, he said, on one occasion told his congregation that hell was filled with booze, jazz and automobiles, whereupon a member of his flock shouted, “Oh death, where is thy sting?”

Refreshments served by ladies, under the direction of Mrs. Arthur Jack was the closing feature of the memorable event.

Arrangements for the exercises in the afternoon were made by members of the Board of Managers under the able direction of Mrs. John P. Crozer, who was chairman of the committee.

BOARD ENTERTAINS STAFF – The members of the Board of Managers were hosts of the medical and surgical staffs of the hospital and a few invited guests ate dinner at the Chester Club in the evening.

This is an annual event, which is arranged by the women of the board, who look after all the details and consequently it is one of the most elaborate affairs of the year in connection with hospital work.  Mrs. John P. Crozer was chairman, being ably assisted by other ladies of the board.  The dining room of the club was richly decorated with exotics, spring blossoms of all kinds and beautiful pansies, tulips and other cut flowers.   On no occasion has this handsome dining room ever been more artistically decorated.

During the serving of the dinner a noted harpist from Philadelphia noted harpist from Philadelphia rendered several very entertaining selections, and immediately the last course was served, President Kingsley Montgomery made a few statistical remarks regarding the operation of Robert H. Crozer Hospital and the surgical wing of the Chester Hospital.  After his remarks several members of the board were called upon for a few words, besides an inspirational speech from Justice Schaffer and an interesting talk by Dr. Frank Crozer Knowles, a noted skin specialist, of Philadelphia, and a nephew of the late Robert H. Crozer, on hospitals from the time of the Christian era up to now.

Doctors J. William Wood, George E. Cross, Adam J. Simpson and others in response to a call from the president, spoke of the new addition to the hospital and the work of the staff, the hospital service to the community and the cordial relations existing between the staff and the Board of Managers.

One of the pleasing events of the evening was a piano selection by Dr. M. A. Neufeld, a finished musician, and a solo by Dr. A. V. B. Orr, both of which were heartily received by the diners.

Posted by Delaware County History at 4:34 AM