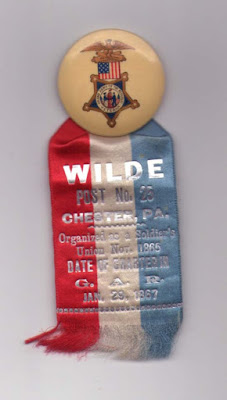 A rare Chester Wilde G.A,R. Post pin from 100 plus years ago.

It has long been forgotten that are true Independence Day is July 2, not July 4th 1776. The Continental Congress voted on July 2 for freedom from England. On July 4th it was announced that the Congress had voted for freedom and that day was soon recognized as our “Independence Day”. Below is a letter John Adams wrote to his wife, Abigail on July 3, 1776.

“The Second Day of July 1776, will be the most memorable Epocha, in the History of America. I am apt to believe that it will be celebrated, by succeeding Generations, as the great anniversary Festival. It ought to be commemorated, as the Day of Deliverance by solemn Acts of Devotion to God Almighty. It ought to be solemnized with Pomp and Parade, with Shews, Games, Sports, Guns, Bells, Bonfires and Illuminations from one End of this Continent to the other from this Time forward forever more. You will think me transported with Enthusiasm but I am not. — I am well aware of the Toil and Blood and Treasure, that it will cost Us to maintain this Declaration, and support and defend these States. — Yet through all the Gloom I can see the Rays of ravishing Light and Glory. I can see that the End is more than worth all the Means. And that Posterity will tryumph in that Days Transaction, even altho We should rue it, which I trust in God We shall not.”
John Adams 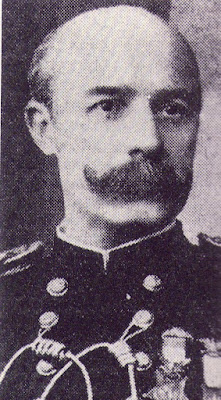 George W. Roosevelt [1844-1906] A Chester native and one of the very few men to be nominated for the Medal of Honor twice. He was a 5th cousin of Theodore and Franklin Roosevelt.

George W. Roosevelt had long given up on receiving the Medal of Honor for his service in the Civil War. He was one of the few men in U.S. history to be nominated for the award twice. Which is why when he received the Medal of Honor in the mail in Brussels, Belgium where he was a diplomat working for the Department of State he was quite surprised. There was no fancy parade or award ceremony, just a little box that came in the mail. It was not unusual at that time for Medal of Honor rewards to take years to be officially rewarded.
Roosevelt was born in Chester in 1844 where his parents, Solomon and Elizabeth ran a store. When the Civil War broke out, he enlisted on May 1, 1861 at the age of 17 in Company K of the 26th Penna. Regiment. He first saw action at the Battle of Bull Run where he recaptured a U.S. Flag that confederate Soldiers had taken. For that he was promoted to  Sergeant. At Gettysburg on July 2, 1863 he captured a Confederate Flag and flagbearer and was promoted to captain. . For each one of these actions he was nominated for the Medal of Honor. Early Medal of Honor Citation’s were very brief, George Roosevelt’s is below. Please note it says he was “severely wounded” but actually he lost a leg at Gettysburg. Roosevelt was discharged from the army on March 14, 1864. He married Mary Elizabeth Perry on July 25, 1865. His second wife was Ida Mae Weber (1850-1926).
Roosevelt, after the war, had a 30 year career with the Department of State serving overseas as a diplomat.  His final posting was as the U.S. Consul General in Brussels in 1906. Captain Roosevelt died in Brussels in 1907 at the age of 63.  he is buried at Oak Hill Cemetery in Washington, D.C.

CITATION:The President of the United States of America, in the name of Congress, takes pleasure in presenting the Medal of Honor to First Sergeant George Washington Roosevelt, United States Army, for extraordinary heroism while serving with Company K, 26th Pennsylvania Infantry. At Bull Run, Virginia, on 30 August 1862, First Sergeant Roosevelt recaptured the colors, which had been seized by the enemy. At Gettysburg, Pennsylvania, on 2 July 1863, he captured a Confederate Color Bearer and color, in which effort he was severely wounded.

Posted by Delaware County History at 6:07 AM