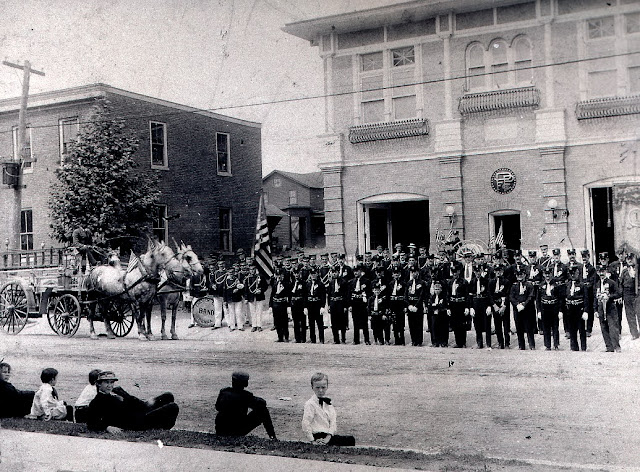 The above picture was taken about 1910 probably for the 4th of July celebration. This was the first firehouse building at 10th and Lincoln Aves.  it was replaced in 1964 by the current building.

NOTE: When two houses burned to the ground in the 700 block of 13th Ave. then known as Carolina Ave. plans began to organize the Prospect Park Fire Co. In the early days all boro men were expected to be members of the fire co. whether they actually "ran" with the fire company or not. They were expected to support it financially. The first fire house was in a stable at 11th and Lincoln Aves.

Birth of a Movement of Citizens That Led to Present Organization

Twenty-eight years ago a fire destroyed two houses owned by George Badgley on Thirteenth Avenue, Prospect Park.  This was the first and last total loss by fire in that borough.  While the embers from these buildings were still aglow, W. C. B. Gilmour, James H. McFall, James Quigley, Andrew McGirr and several others were holding a curbstone conference just across the street from the smoldering ruins.  This conference gave birth to a movement of citizens which crystallized in the formation of the present very efficient Prospect Park Fire Company.
Henry Cox became the first president, and at that period a combination hose carriage, purchased from Indiana County, and which had originally been donated by Hamilton Disston to the Shaffer Hose Company of Philadelphia, was the extent of its firefighting facilities.
But it might be interesting to know that this Badgley fire was contested by a bucket brigade in its initial stages, but when it was seen the blazed was getting beyond control a pond pump “engine” possessed by the village of Morton arrived amid cheers and did heroic, if futile service.
The charter of the Prospect Park Company bears date of 1895, and its present membership numbers 526, though but 40 of this large membership are rated as active association membership, the remainder being classified under the head of club house members.
The imposing home of this company was erected in 1909.  It is of stone and brick and cost approximately $25,000.  There is practically no indebtedness on the building or apparatus.  Probably it is no exaggeration to assert this fire house is one of the finest arranged and furnished in Delaware County.  Its interior is particularly attractive and reflects an atmosphere of comfort and refinement.
The lavatories, pool room and heating system are systematically arranged in the basement, while a club and working room, borough council chamber and firefighting apparatus are housed upon the first floor.  The club and reading room, in finishing, and furnishings, reminds strongly of feminine tastefulness in general arrangement and influence is strongly metropolitan.  A commodious auditorium takes in the entire second floor.  The janitor’s quarters are at the rear of the fire house proper in a sort of annex dwelling apartment removed from the fire house proper.
The apparatus consists of a Garford truck and Boyd pump with capacity for 1,400 feet of hose, and funds are now being raised to purchase, in addition, a chemical truck.  There are both electric siren and bell fire alarm systems.
In giving a series of articles of the sixty odd volunteer fire companies in Delaware County, the first impression might prevail, the reviews would follow along a forced cut-and-dried channel of thought and expression.  However, such an impression, if formed, would be entirely wrong.  While admittedly all these firefighting units are fundamentally organized after the same code of formalities, yet the setting of each one is vastly different.  This difference is created by local flavor, such as incidents connected with their organization and since, of course, almost all the fire companies have a relief association, as is well known, a goodly portion of the funds for this beneficial object is derived from the State tax on foreign insurance companies.  In this connection it might be interesting to mention the sum of 29 cents was carried upon the borough treasurer’s books on account for thirteen years before a relief association was formed.  Under the provisions of the relief association $150 is paid to the heirs of a deceased member.  There are no benefits for accident nor sickness, though some such arrangement is under advisement and will probably be formulated at an early date.
The officers of the Prospect Park Fire Company are as follows:  President, Jesse Z. Rush; vice-president, Jacob F. Mansure; treasurer, John C. Tulloch, secretary, W. E. Wunderlich; chief, Alexander F. Bordiahan; first assistant chief, Charles D. Hart; chief engineer, A. Heald; assistants, J. C. Maller, Robert G. Browning, A. Mansure and Albert Harper; surgeons, Dr. J. B. Haynes and Dr. R. Owens.
There are three departments in the company, truck, salvage and police, which are functioned as follows:  Truck, Captain B. Green; salvage, Captain Robert Hagerty, and police, Captain George Orr.
Since its organization six members have occupied the president’s chair, these being:  Henry Cox, John C. Apgar, Edward Dobeldower, C. Scott Rickards, Dr. E. S. Boice and Jesse Rush, the present incumbent.
The Ladies’ Auxiliary which flourished during the period, efforts were being made to raise funds to erect the fire house, is given unstinted praise for the unflagging interest and generous support given by its membership toward the movement.  The men even now admit without this support the clubhouse project might have been delayed several years.  Among those who were prominent in the auxiliary at that time were:  Mrs. Broomall, Mrs. Samuel Sill, Mrs. George W. L. Butler, Miss Ruth Butler, Mrs. John C. Tulloch and Mrs. C. Scott Rickards. enry  Cox 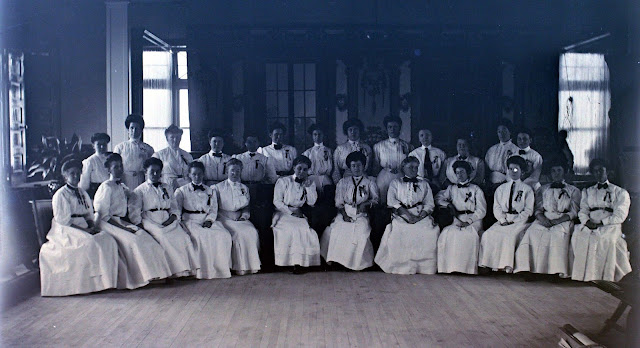 All fire companies had very active ladies auxiliaries back in the day. The ladies ran dinners and fund raisers to help their fire companies. Above the Prospect Park Fire Co. Ladies Auxiliary from about 1910 taken on the second floor of the firehouse which was a large meeting hall.


As Delaware County enters the "green" phase of reopening, the Colonial Pennsylvania Plantation will be allowing visitors at the site starting Saturday, June 27th and continuing on Saturdays in July from 11am-4pm.

In order to ensure the safety of our staff, volunteers and visitors, we have modified our operations in response to COVID-19 and we invite you to review the details below to help you plan your visit.

Pre-Registration Required
We look forward to welcoming you back to the farm! In order to limit the number of visitors on site at any given time, we will be selling tickets in half-hour time slots. Please plan to arrive five to ten minutes before your time slot. We strongly encourage you to purchase tickets in advance to avoid being turned away at the door.


During Your Visit
All visitors are required to wear a mask when social distancing is not possible, and at all times when interacting with our staff and volunteers. Only the first floor of the historic house will be open. Hand sanitizer stations will be available throughout the site, and handwashing is available in our restrooms. Only one household group is permitted at a time at any one activity/demonstration. All demonstrations will be held outdoors or in open-air structures, with six-foot areas roped off around each demonstrating staff member.


Before You Leave the House, please remember to bring your:
Proof of your pre-registration. Printed tickets recommended but you can also show your ticket on your cell phone.
Mask or face covering.
Tickets can be purchased on our website at http://www.colonialplantation.org
Jennifer L. Green
Executive Director
Colonial Pennsylvania Plantation
Ridley Creek State Park
610-566-1725 / colonialplantation.org
Posted by Delaware County History at 4:20 AM