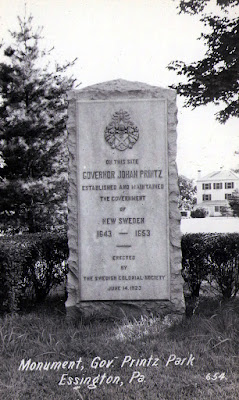 The Governor Johan Printz Monument in Governor Printz Park in Essington at Second and Wanamaker Aves.

NOTE: I was quite surprised when I found this article the Lindbergh/Printz Park in Essington. After crossing the Atlantic Ocean in 1927, Lindbergh went on a world tour. He visited Phila and Delaware Co. including flying over Chester City which was front page news. The naming of the park was a surprise. I have never heard Lindbergh in the parks name.

On the eve of Charles A. Lindbergh’s arrival in Philadelphia, the Swedish Colonial Society of Philadelphia announced today the establishment of Printz-Lindbergh Park, a pleasure place named to honor jointly a Swede, who was the first white settler in Pennsylvania, and the American youth of Swedish blood who made history by flying the Atlantic.
From a historical viewpoint the oldest parcel of land in Pennsylvania the seven-acre park is situated on Tinicum Island, in this county.
Although this grounded was offered to the Swedish Society some months ago and accepted shortly after, it was not until last week that the land actually became its own.  Several days ago the deed was transferred by the Tinicum Improvement Company, which held title to Tinicum property, for Charles Longstreth, of Coronado, Cal., the donor, to five trustees for the Swedish Colonial Society.
SPROUL ON BOARD – The members of the board are Colonel Henry D. Paxon, Dr. Thomas Lynch Montgomery, Major David S. B. Chew, former Governor Sproul and Ormond Rambo, Jr.
It was upon the Tinicum Island tract that the first white settlers of Pennsylvania established a permanent residence, one year before William Penn was born and thirty-nine years before he came to this country.  That was in 1643.
Governor Johan Printz, Provincial Governor of New Sweden (now Delaware), was the first great Swede to help establish this country in the eyes of the world, and Lindbergh is the latest man with Swedish blood in his veins to being the United States before the nations.  That is why the society thought that no name would be as appropriate for this historical site as Printz-Lindbergh Park.
Lindbergh’s topics principally in the interest of aviation it was thought inadvisable to ask him to officiate at a formal dedication of the park at present, as there would be little time on his crowded program.  The society plans to seek his early return for this ceremony.
EXPECT LINDY AT CEREMONY – According to Colonel Paxon, president of the Colonial Swedish Society, the Board of Trustees is virtually certain that both the donor of Printz-Lindbergh Park.  Mr. Longstreth and Lindbergh, will be on hand when the date is set to dedicate the ground.
The five men representing the Swedish Society have not yet decided what will be done with the seven acres besides transforming it into a park.  There is a large residence on the grounds, which has been leased and is being used as a roadhouse.  A pavilion, barn and several other buildings are also on the grounds.
The lease does not terminate for another year, so plans for renovation will not be completed for some time.  It was suggested that a reproduction of Governor Printz’s home be erected, but the only plans the builders have to follow is that the house was, entirely of logs and was two stories high.
When Mr. Longstreth offered the estate to the society, it was stated the ground was five acres.  A recent survey shows it to be seven acres.
The Corinthian Yacht Club adjoins the grounds on one side, a boat construction company on the other, and the Delaware River runs along the front.  Second Street bounds the estate in the rear. 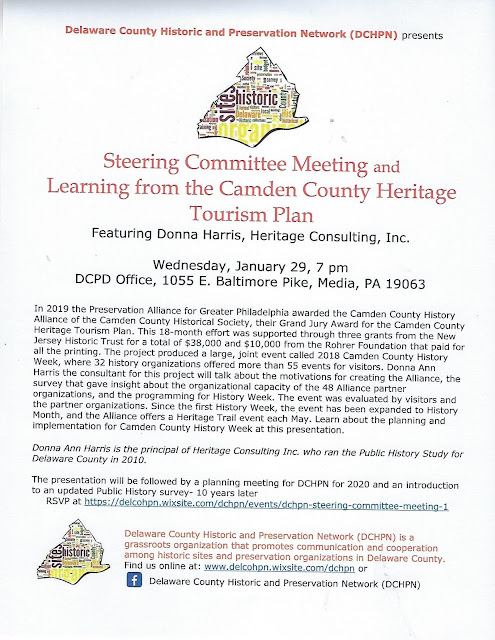 ﻿
Posted by Delaware County History at 6:25 AM