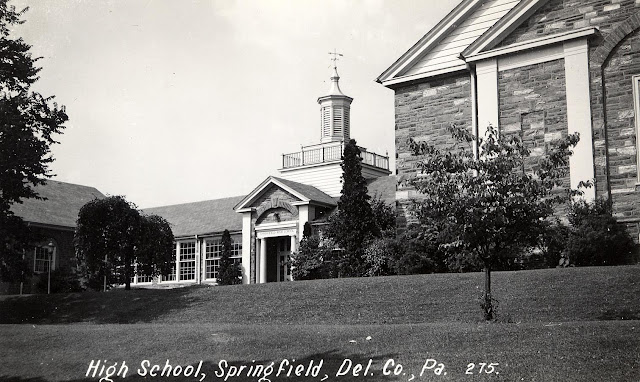 A picture of the Springfield Twp. High School from 1948

Note: Delaware Co, was growing fast in the 1920's and improving schools and building new ones was a top priority to make Delco more attractive to new homeowners. A special Thanks to the "Great" Kate Clifford who puts all the events together below for DCHPN

PROMISING YEAR FOR NEW SCHOOLS IN THE COUNTY

This promises to be a great year for building new school buildings in Delaware County.  No less than six school houses will be built in various districts.  The new school houses are necessary because of the rapid increase in population, especially children of school age.

This increase has been due principally because boroughs and townships in the east and the center of the county are being crowded with new people who are coming from Philadelphia.

Newton Flounders of Media is the architect.  His plans call for a pretty structure to be built of Johnston stone.  The building will be 40 by 150 feet, four rooms, with two play rooms in the basement.  The school will be a unit for a large school building in the future.

The new school house will be erected on a two-acre lot on Saxer Avenue short distance from South Springfield station of the Media Short Line.

The meeting was presided over by Joseph W. Sloan, president of the Springfield School Board.  The other members of the board, who were present, were:  A. A. Ackerman, Joseph Heller, W. F. Rice and D. Britton Chambers.  Harry J. Makiver, solicitor of the board was present and drew up the contract for the new school building.

Ground will be broken on Monday morning for the new building which will be completed in time for the opening of the fall school term.

The new school house will be in keeping with the present beautiful surroundings which is being built up with pretty homes.

MORE NEW SCHOOLS – Upper Darby Township which already has the finest school houses in this county, is now having plans prepared for building of a new twelve-room school house in Garrettford.  This new school house will be built of granite and will cost approximately $150,000.

Yeadon School Board has purchased a large tract of land adjoining the present school house on church Lane from W. Raymond Evans, the well-known real estate conveyancer of Yeadon and Lansdowne.  On this site, Yeadon will build an eight room school house.  This will be a decided improvement over the present one story old four-room building.  The new school house will cost approximately $75,000.

Clifton Heights is also having plans prepared for a new four-room school house.  This school house will be built in front of the present building, and it will be a unit for a future big school house.

Middletown Township school directors at a meeting on Thursday evening, opened bids for the erection of a new school to be built on a four-acre plot at Wells’ Corner, opposite Middletown Road.  Samuel Coates, of Philadelphia, bid $26,000.60.  He is the low bidder.  This building will be of stone, 100 x 40 feet.  The building will have three class rooms and a large play room in the basement.  The school will be a unit for a larger school in the future.  The officers of the Middletown School Board are Richard Taylor, president; Harry Varnick, secretary; Rowland Evans, John D. Lawton and William Eves.


Posted by Delaware County History at 3:00 AM