Old Indian Names for Delco Creeks and Have a great Holiday Season!! 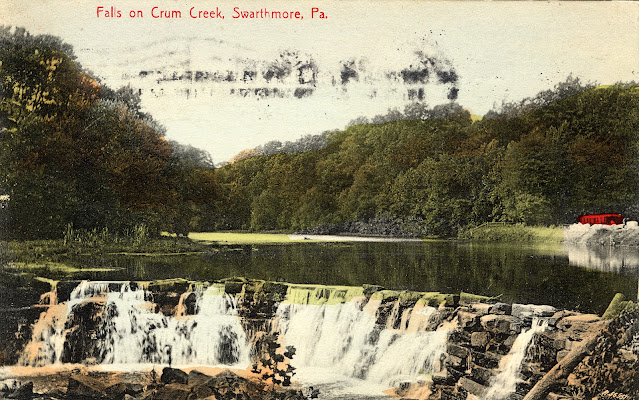 The Falls on Crum Creek from about 1910. This is the same dam that you see today where Yale Ave. crosses Crum Creek.

Back in the very old days Delaware Countians took a swim in Amosland kill, went wading in Calkoen Creek, fished for croakers in Mill Creek, and went boating on the Crooms.  And the Lenape Indians sailed birch bark canoes on the Meechoppenackhan.

Today there aren’t any Indians on the Meechoppenackhan but there are modern canoes on the Chester River, boats on Crum Creek, fishermen in Cobbs Creek and waders and swimmers in Darby Creek.

Practically all of the county waterways were known by other names during the early years.  Following are the stories of the old names and accounts of how the streams got their present-day titles.

The proper Indian name for Chester Creek was the tongue twister – Meechoppenackhan.  Translated, this name meant “the large potato stream” or the “stream along which potatoes grow.”  The Okehocking Indians, a tribe of the Lenapes, owned most of the land along the creek.

Whether they raised the potatoes or whether they grew wild the records do not show.  However, the name would hardly be applicable today since the banks of the Chester River aren’t renowned for their potato bearing qualities.

The present name of the river seems much more appropriate.  It was obviously named for the city although there is no record of any formal naming date.  Opinion is that common usage affixed the name.  Today, however, there is still some discrepancy.  Officially it is the Chester River although many persons insist on calling it the Chester Creek, the name by which it was known for years and years.

Cobbs Creek, which forms the eastern boundary of the county separating it from Philadelphia, was known as Mill Kill or Creek in the early days of local settlement.  The name Mill was given because the Swedish water mill built by Governor Printz in 1643 was located on its banks.

When the English settlers moved in, the name Cobbs was given.  It seems the name was derived from William Cobb who owned a large tract of land along the banks of the creek.  In 1683 Cobb was appointed by the court at Chester as constable for “Amosland and Calkoen Hook.”  These sections are now Ridley Township and Folcroft.

Darby Creek had then old names, Mill Creek, Calkoen Creek and Amosland Kill or Creek.  It was later named Darby for the township and borough located along its banks.  Originally the creek was considered a branch of Cobbs Creek despite the fact that it is a much larger stream.

One county stream that still retains its old name is the Muckinipattus.  This stream starts in Springfield Township, flows through Upper Darby and the northern segment of Darby Township, then through Glenolden and then forms through Glenolden, and then forms the boundary between Norwood and Folcroft.  The name is undoubtedly of Indian origin although there is no record of what the odd title meant in Lenape Indian language.

Stoney Creek was most probably named by everyday reference.  A common name for a creek the title was probably descriptive, although not too exclusively, of the many stones in the creek bed.  Stoney Creek also starts in Springfield Township and flows through Ridley Township and Ridley Park.

At the other end of the county is the Brandywine.  There are three theories on the origin of the name of the historic creek on whose banks one of the decisive battles of the Revolutionary War was fought.

The first story tells about a vessel laden with “branntwein,” or brandy that was sunk in the waters of the creek.  Thus the name – the creek with the “branntwein” in it – Brandywine being a corruption of the original name.

Another explanation says that the name was applied because “the slough near Downingtown discharged its muddy waters into the creek tinging it the color of brandy.”

The third theory is that the name was given for a man named Andrew Braindwine, who once owned land close to the banks of the mouth of the creek.

Ridley Creek was undoubtedly named for the same reason Ridley Township and Ridley Borough were named.  The name was taken from the English home of John Simcock, one of the area’s earliest settlers.

Crum Creek was believed to have been named by the early Swedish settlers and Crum is believed to be a man’s name.  Records show that the name was originally spelled Croome and that the present name is a corruption of that.

A very special thanks to my good friend and computer expertise, Bob Strickler who finally got my blog working right again!!