The Forgotten Joseph H. Weeks and his park in Swarthmore. Upcoming events 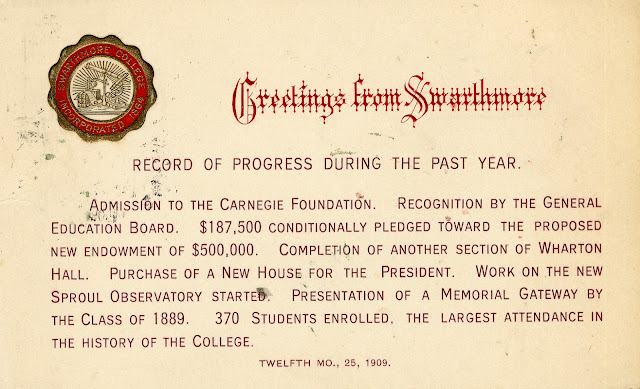 The above postcard  from 1909 shows the then progress of Swarthmore College and it's then 370 students.

Note: Joseph H. Weeks has been long forgotten, but 100 plus years ago everyone knew his name. The founder and first president of the Keystone Automobile Club, Weeks personal mission was to improve the roads in the state of Pennsylvania. In 1911 he personally wrote the "Sproul Act" which established the Pennsylvania Highway Department one of the first  in the United States. It is hard to imagine today how bad roads were 100 years ago.  Weeks died in 1919 and the Keystone Automobile purchased a small lot of land on Baltimore Pike in Swarthmore Boro to be a memorial park for Weeks. The park sits at the intersection of Chester Rd., Baltimore Pike and Oakdale Rd.  No monument or plaque in honor of weeks was ever done in the park.

Unique Monument Will Be Erected at Swarthmore on Baltimore Pike

A tribute to the memory of the late Joseph H. Weeks, who did much to bring ab out Pennsylvania’s first comprehensive state highway system, as well as organizer and first president of the Keystone Automobile Club, is the purpose for the establishment of a beautiful memorial at Swarthmore.

In 1911 Joseph H. Weeks accomplished one of the outstanding events of his career.  He wrote and assisted in having put on the statute books the most progressive measure ever enacted for the good of motorists in Pennsylvania.  That was the Sproul Act of 1911, which provided for the state’s great primary system of highways and establishment of its highway department.  The entire text of this act was written by Mr. Weeks and the bill was sponsored by Senator Sproul (afterwards Governor, whose name it bears.

It was this act that ex-Governor Sproul referred to recently in a speech when he said:

“The real father of good roads in this state is Joseph H. Weeks, the late president of the Keystone Automobile Club.  I had some sort of plan for better highways through a scheme of state aid, but he had devised a comprehensive state highway system and pumped me so full of enthusiasm for it that was finally put through.

It was during an extensive speaking tour of the state in 1913, when the first fight was being waged to amend the state constitution permitting the borrowing of money for road construction purposes, that Mr. Weeks suffered the physical breakdown which resulted in his death six years later.

For thirteen years he was the recognized leader for good roads matters in Pennsylvania.  He built up for the Keystone Automobile Club a prestige greatly beyond what the size of its membership (it was slightly less than four thousand at his death in 1919) warranted.  He was openly opposed to the game of graft practice upon the motorist.  For him, there was no closed season as against grafting magistrates and constables or any other of like ilk whose aim was to victimize the automobile owner.

The Keystone Automobile Club recently purchased the ground at Swarthmore where the memorial is to be erected.  The cost of the proposed memorial $35,000, is to be raised by popular subscription.

The memorial monument to be erected has as its central feature a large bronze plaque sixteen feet in diameter containing a relief map of the original state highway system as established by the Sproul Act of 1911.

The plaque is surrounded by light colored stone curbing at the bottom of a sunken terrace circular in form at the top of which is another curb and a surrounding walk from which the tablet may be contemplated.  Surrounding the walk is a circular balustrade behind seats whence motorists may rest and study their routes upon an appropriate street map.  There surmounts each of twelve pedestals an ornamental vase, rising to a height of about eight feet above the walk and giving a distinctly monumental garden effect.  The whole terrace is raised four steps above the surrounding walk on either side of which there are circular clipped privet hedges, which in turn are surrounded by a sloping terrace.

The main approach is from the intersection of Baltimore Avenue and Chester Road and other approaches are located from each of the other intersections, giving three general approaches in addition to the intermediate approaches immediately in front of the circular form.  Large shrubbery bushes planted behind the light-colored stone will give a pleasant relief and at the same time obscure the school building on the other side of the street.  New trees, shrubbery and surrounding walks complete the park, all of which have been arranged so that it will not be necessary to disturb the work when Baltimore Avenue is eventually widened to its full width.


Posted by Delaware County History at 4:31 AM