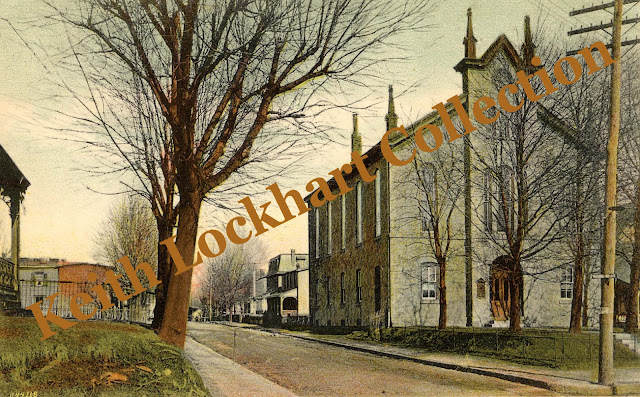 The Clifton Heights Methodist Church at 111 S. Springfield Rd. The picture is from about 1912. Notice the dirt road.

Note: In this day and age everything changes, Sadly, many old Delco churches are closing from poor attendance etc. Clifton Heights  Methodist will soon celebrate their 150 year anniversary. Congrats!!

The special services which are being conducted at the Clifton Methodist Church are being well attended and the sermons preached are of an inspiring type.

Rev. B. F. Miller, pastor of the church, is incapacitated by a slight attack of rheumatism, but is busily engaged in welcoming the large numbers of persons that attend the services each night.  The occasion of these special services is the celebrating of the fiftieth anniversary of the founding of the church and this week is termed “Golden Jubilee Week”.  The sermon of Monday night was preached by Rev. T. Norton Tyler of Bristol.  He took as his theme “What Thou Lackest” and applied it in a manner that made it appropriate for the opening sermon of the week.  Tuesday night the sermon was preached by Rev. Lewis A. Bausman of Darby.  Mr. Bausman was formerly pastor of the Clifton Church and it was quite a treat for the members to be able to have him occupy the pulpit again.  The singing feature of the evening services was supplied by a girls’ chorus of twenty-five voices from Mr. Bausman’s church in Darby.

Last night Mrs. Eaton of the Weman’s Home Missionary Society spoke and the program for the entire week has been so arranged that there will be a forceful speaker occupying the pulpit each evening.  Following is a history of the founding of the present house of worship.

CHURCH HISTORY – The territory now forming the Clifton Heights parish was for many years included in the circuit composed of Mt. Zion Church, Darby; Kedron Church; Morton and Mt. Pleasant Church, near Garrettford.  Some of the pastors who served the circuit in those early days were Joseph

The parsonage was located in Morton.  On April 5th he unpacked his goods, and on April 9th the parsonage was burned to the ground.  On April 16th he moved to the Shillingford house on Springfield Avenue, north of Baltimore Avenue in Clifton Heights.

The first sermon preached by a Methodist minister in Clifton was delivered by Rev. Fries in a room above a blacksmith shop on Springfield Avenue above Baltimore Avenue on May 15, 1870.  The text was John 3:15.  The first Sunday school was organized April 13, 1876 and was held for some time in the upper room of the blacksmith shop.  In November 1876, Rev. Fries secured the following subscriptions toward the purchase of a lot on which to erect a church:

Joseph McCormick, $50.00; Dr. Green, $50.00; M. Dean, $30.00; Edw. Elvely, $30.00; J. Shillingford, $10.00; J. H. Wise, $10.00; Lou Gilmore, $10.00W. H. Fries, $10.00; J. B. Jones, $10.00; George Long, $10.00; Charles Smith, $10.00; Thomas A. Palmer, $5.00; John Donnell, $5.00.  On January 4, 1870, the trustees purchased the stone for the corner on which the church and parsonage now stand from David Kelly, upon which they paid the sum of $60.  This sum, we are told, was the entire price of the lot.  Mr. Kelly requiring only this small price because it was purchased for church purposes.  On this lot the present building was begun in the early summer of 1871, and the cornerstone laid on the 15th of August of that year.  The first story was completed and dedicated to the worship of God in the latter part of October 1872.  The church was built under the pastorate of Rev. Mahlon H. Slaty.  He met with much opposition because of the size and character of the building and the heavy debt.  Many people called it “Slaty’s Folly,” but time has proved the fact that he built wisely.  After fifty years they have a splendid building, commodious and substantial, accommodating a flourishing church and Sunday school.  In 1874 Mr. Slaty revised the church records.  Clifton church then had a membership of sixty-six.  Those of the number who are members of the church today are:  Joseph Congleton, Hannah Langry, John Lord, Isaac Lord, Ruth Ann Lord and Rebecca Lord.

Fifty years ago this was the largest church building in Delaware County.  In 1833 Rev. Nathaniel Turner, while pastor of the church, built the parsonage at a cost of $2,800.  That was a big advance step, and was occupied by the pastors without much change for a period of 18 years, or until the present year, when, as we know, improvements have been made to the parsonage and church, including furnishing, costing more than $4,000.  It was well built in the first place, which made the exte3nsive improvements possible.

The Methodist Church of Clifton Heights will become, owing to the faithful work and devotion of the fathers and continued activity of their successors, one of the strongest suburban charges.  They are in fine condition today, and see ahead a period of greater prosperity than they have ever experienced.

The building of the parsonage in 1882 was made possible by the faithful work of Rev. Matthias Barnhill.

Posted by Delaware County History at 3:39 AM