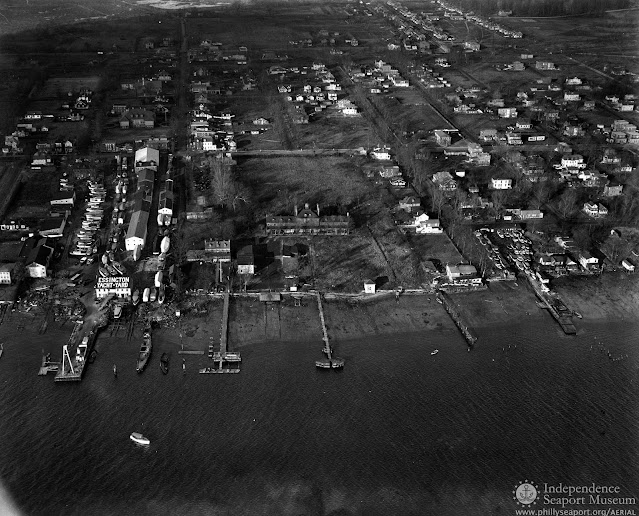 An aerial view of the Lazaretto in Tincum from the air about 1920.

Note; From 1801 till 1895 when it closed the Lazaretto in Tinicum Twp, served Philadelphia and the area as a quarantine station.  The station stopped every ship going upriver to Philadelphia. The place was busy in it's day and it was not all fun and games. Ships were sometimes stopped and quarantined. The station at one time had a small cemetery which has long since been removed.  In 1895 the quarantine station was moved down river to Marcus Hook where it stayed till the 1940's. Shortly after it closed the Lazaretto was sold at auction in October of 1896 for $5000.00. There were only 3 bidders. Below is an article about how the Lazaretto was run.

How the Officers Ward Off Disease and Pestilence

One of the most familiar objects on the river is the tug Visitor, which flies the yellow flag ornamented with its big Q, which stands for quarantine.  Though the official messenger of the Lazaretto, yet comparatively few people of this city know how its officers go about their duties, or how affairs are managed at the quarantine station just outside our doors.  But the people of Chester have such faith in the efficiency with which all regulations are enforced at the Lazaretto that they are not alarmed when the most dangerous diseases are known to be there.

The old line of the Philadelphia, Wilmington and Baltimore Railroad used to run close to the quarantine station, but it cannot be seen from the present route, and few people ever think about its presence.  It can be reached from Moore’s station, but Chesterians prefer the river route.  A familiar figure is Robert Carns, the steward, whose hospitality is proverbial, and he courteously shows visitors all over the place, unless the presence of some disease makes it necessary to exclude callers.

The Lazaretto looks like an old mansion of the Southern type and is quite picturesque in appearance.  The main building is the steward’s house, and from the cupola the flag is raised.  The right wing is used as the quarters for the crew of the Visitor, and to the west, facing Tinicum channel, is the residence of Dr. H. B. Brusstar, the present physician.  Robert M. New hard, the genial Fernwood druggist, lately made Quarantine Master, lives with his family in a dwelling on the east.

The tug is commanded by Captain Andrew Duey, whose crew consists of N. B. Archambault, engineer; Joseph Brooke, fireman, and Jacob Anderson and James Wright, deck hands.  As soon as the officer in charge sees a foreign vessel approaching, he gives the signal and the physician and Quarantine Master board the little vessel and are borne toward the stranger.  The physician orders the captain to prepare the vessel for inspection and the Master goes below to inspect it.  The captain is asked a number of questions under oath, and if he misrepresents any sickness aboard, is liable to spend five years in jail reflecting on the falsehood.

If the questions are satisfactorily answered the Quarantine Master’s inspection reveals nothing infectious, the vessel is permitted to proceed into port, otherwise she is detained at the Lazaretto and fumigated.  If there is any doubt about the nature of the disease of any sick passenger or sailor, the patient is taken to the hospital and the vessel detained until the case develops sufficiently for the physician to determine whether the case is of a contagious order.  Captains could steal up the river at night, but the risk in evading the quarantine examination is so great that no one ever cares to take it.  Pilots are well versed in the laws and know too much to pass the Lazaretto without first receiving the official sanction.

Posted by Delaware County History at 3:50 AM