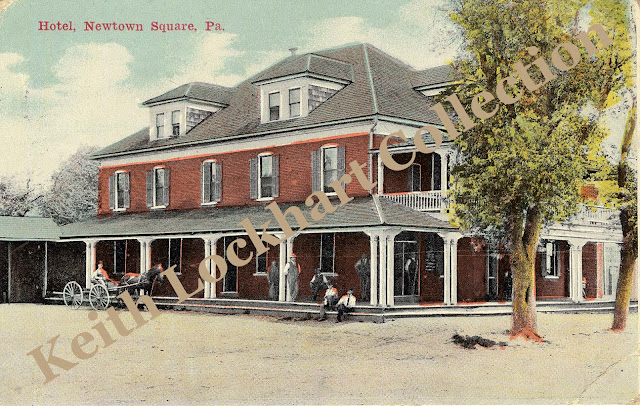 Note: One hundred years ago when the majority of property in Delaware County was farmland every little town had their own hotel, for visitors and business people etc. After WW2 as Delco grew like crazy, these hotels all but disappeared. A little history of the Newtown Hotel.

Owners Past and Present

Travelers who follow the old West Chester Pike or trolley line to Philadelphia, says the Local News, are interested just now in the old hotel at Newtown Square, which is soon to be remodeled.

A man who heard various comments on the property comes to the front with a bit of history showing who the previous owners were and tracing the title in regulation style.

The property belongs to William T. Davis, and is leased by Ed. Summeril.  Mr. Davis will erect a building worth about $10,000 thus complying with the requirements of the Delaware County Court.

The first application for a liquor license at the old hostelry was made by William Beaumont, on the 25th of July, 1796.  Further data is appended, from a search of the records.

William Penn, at the time of the settlement of this county of Chester, conceived the idea of locating a townstead in the township of Newtown, now Delaware County, and donated to each purchaser of property within the township a portion of land fronting on Newtown Street, now Paoli Road, the amount of land being in proportion to the number of acres taken up in the outlaying portion of the township.

The amount of land within the limits of the townstead was about equal to one mile square, yet its length from north to south was greater than from east to west.  These town lots have mostly been purchased by persons owning adjoining properties and at the present time there is but little of the old lines of the townstead left.

About the time of the settlement of these parts Daniel Williamson came to be the owner of different lots on the southwest corner of the townstead and among them was the one upon which the hotel buildings at Newtown Square now stands.

On the 13th day of the 10th month, 1719, Daniel Williamson conveyed to John Allan 174 acres of land in Newtown, in which tract was included what is now the thirty-six acres, comprising the Newtown Square Hotel property.

John Allen’s will, dated the 6th day of second month, 1720, after he had bequeathed to different persons various sums and articles, says:  “7th.  I give and bequeath all the remainder of my real and personal estate to my well beloved wife, Alice Allan.  Lastly, I do nominate and appoint my wife and John Williamson to see this, my last will and testament, fulfilled and performed.”

By the will of E. Woodward, whose death occurred in 1754, the property then consisting of about 200 acres, passed to his son, George Woodward.

George Woodward’s will, dated the 13th day of 12 mo., 1756, devised the above mentioned real estate to his sister, Jane Woodward.

After the death of Nathaniel Newlin, this widow, Jane Newlin, conveyed to Robert Mendenhall, blacksmith, on the 12th day of 3rd mo., 1783, the following described tract of 36 acres, which comprises the Newtown Square Hotel property.

“Beginning at an “S” at the mouth of the lane or road passing through the aforesaid plantation, where the same intersects with the road leading through Newtown to Chester, near a fork thereof, being in the line of the land late of Morgan James (now Penn Hospital property), thence by the said James land and the land now of Samuel Kelley north 25 degrees west 74.5 perches to the corner of the land late of Evan Lewis (now the Haines property), thence by the same south 54 degrees, west 76 perches to a post, thence by the said Jane Newlin’s other land south 25 degrees, each 86 perches to a stone by the first above mentioned road, thence by said road north 45 degrees, east 73 perches to the place of beginning, containing 36 acres,” and was the northeast corner of the before mentioned 200 acres.

At that time, 1783, what is now the West Chester road, had not been opened west of Newtown Street or what is now known as Paoli road.  After purchasing the said property Robert Mendenhall commenced to improve and build for himself a dwelling which is still standing and is the east end of what is now the hotel building.  He also built a smith shop and other shops on Newtown Street, along by where the store and other buildings now stand.  He continued to own the property till the lst day of 3d mo., 1796, when he conveyed it by deed to William Beaumont, who soon afterwards built to the west end of the dwelling which Robert Mendenhall had elected and prepared to open a hotel.  He continued in ownership of the property until his death, which occurred in 1810, and by his last will and testament, he devised it to his son, Davis Beaumont, who by deed dated August 2, 1869, conveyed it to William T. Davis, who is the present owner.

The first license for a public house at that place was granted to William Beaumont, and since that time the different landlords have been Davis Beaumont, James D. McClellan, John Paschall, Joseph Hizer, William T. Davis and Edward Sumeril, who is the present landlord.

He has been the Chairman of the Delaware County Heritage Commission for the past 18 years. As chairman, Rich was involved with every historic group in Delco, with planning, promoting, etc. with every idea, program and event in Delco. He was the unofficial historian of Marple Twp. and if he did not know the answer to a historic question he knew who to call. Currently, Rich was helping me with several of my history projects that included Marple. He worked with so many historic groups on so many projects, I do not know where to start. He was always there to help me and anyone else in Delco with a history question or problem. He will be greatly missed.
His family respectfully requests that anyone who wishes to express their condolences at this time, do so by sending a donation to the 1696 Thomas Massey House at

Posted by Delaware County History at 3:31 AM