Part of Chester Pike for sale!! The Colonial Plantation is having a Civil War Event!! 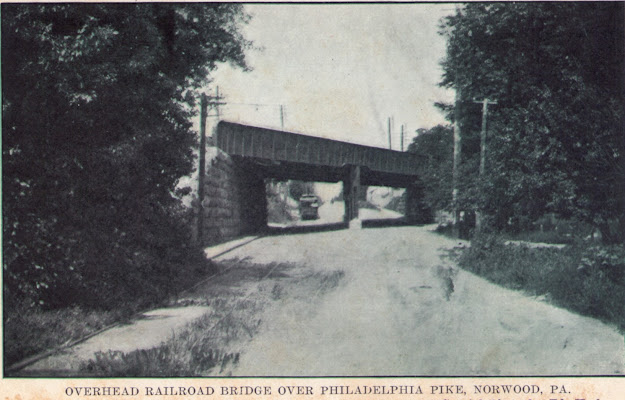 Note: It is hard to imagine today but the 6 miles of Chester Pike from Darby to Chester was a toll rd. from 1851 till June of 1921. There were 6 toll booths on the pike each charging about 3 cents a booth, making the pike expensive for the day. Basically it cost 20 cents to go 6 miles! The stat had been trying to buy this section of Chester Pike since the 1890's. To buy Chester Pike and it from tolls cost $100,000 dollars. To repair and widen it cost over $500,000 dollars and took over 5 years. There was a big fight between the state and pike homeowners on how wide to make the pike, luckily the state won!

Historic Chester and Darby Pike Among Those Negotiated for Highway Commissioner

Horsemen and automobilists, not only in this and Philadelphia counties, but of the entire eastern section of the State, will be pleased to know that the historic Chester and Darby Pike, rich in the history of the country from the time of William Penn, is included in the list of toll roads for which negotiations have been opened by State Highway purchase by the State, which will make this important highway free.  The State has made an appropriation of $250,000 to purchase 11 sections of turnpike, comprising nearly 70 miles of roadway.

Several years ago there was an attempt to have Delaware County take over the Chester and Darby turnpike, and when the matter was taken up for settlement, a jury in June 1907 placed a valuation of $25,000 upon the six-mile stretch of roadway, and made a report that this sum be paid.  The Chester and Darby Telford Road Company, which controls the ancient franchise, however, asked $45,000 for its property which was considered excessive.  Final arguments on this award was heard before Judge Broomall in the hope that the road be taken over by the county on terms agreeable to both, but nothing came of the negotiations which had been going on for three years since 1904.

Before the days of railroads, the Chester and Darby pike or the old Chester pike, as it is popularly known, was the connecting link that bound the North to the South.  The old pike is brimful of history.  As an Indian trail through the primeval forest, where the bear and the wolf lurked in its recesses, William Penn and the first body of his Quaker settlers, made their way from Chester, where he landed October 23, 1682, to the new city which he was to found.

Travel increased so much during the next 25 years that the old Indian trail was found to be inadequate, but in 1705 a petition, signed by 100 inhabitants of Chester, praying that the sole power of laying out the Queen’s road, as it was called after Queen Anne be lodged with Governor Penn.  Acting upon this petition, the road was started by William Penn, leading into Chester at the point it now does.

A bitter feeling resulted against several of the road commissioners, particularly against one named Jasper Yates, which indicates that “graft” and fat contracts were as common 200 years ago in this country as they are supposed to be now.  It was said that Yates had the new Queen’s highway surveyed through his own and the property of his father-in-law, by which both were benefitted.

It was along this same Chester Pike that Washington, at the head of 16,000 ragged Continental soldiers, marched from Philadelphia on Sunday afternoon on August 27, 1777 to Chadd’s Ford, where he was defeated several days later in the Battle of Brandywine, and was driven back into Philadelphia to Germantown where he was again defeated at the beginning of the darkest days of the Revolution.

It was along this same Chester Pike that Washington made his way from Mount Vernon in April 1789, to be inaugurated President of the United States in New York, and it was along it that he went back to his Virginia plantation in 1797, after refusing to serve his country as its Chief Executive for the third time.

Years ago, when the Chester and Darby Telford Road Company first took possession of the road, it was only 20 feet wide, and was covered with heavy wooden planks.  The tollgates are located at Sharon Hill, Glenolden, Prospect Park, Ridley Park Crum Lynne, and Eddystone.

The Colonial Pennsylvania Plantation will be hosting a Federal and Confederate skirmish and camp on Saturday, September 26th and Sunday, September 27th. Visit the Plantation to witness firearm demonstrations, drills, and camp life. Skirmishes will take place on Saturday at 11:30pm and 2:30pm. Sunday’s skirmish is at 1:00pm.
Note: While the skirmishes are in action, no one will be admitted to the Plantation, so please plan to arrive before or after the skirmishes.
The Plantation’s hours are 10:30am to 4pm on Saturday (last admission at 3pm) and 11am to 3pm on Sunday (last admission at 2pm.) Admission is $12 for adults and $8 for children ages 4 to 12. Children under age 4 are free, as are members. No discounts or passes will be accepted for this special event. Please purchase tickets in advance by visiting www.colonialplantation.org
GPS Address: 3900 North Sandy Flash Drive, Newtown Square, PA 19073

Posted by Delaware County History at 4:31 AM