Haverford Twp. home of "Pretty Homes" and expensive ones!! The township development 100 years ago. This postcard is from about 1915 and I'm not sure of the location. It says the junction of Lancaster Pike and State Rd. I'm hoping someone can help. See other picture after article.

Note: Delaware County began to develop in the 1870's from farmland to homes and took off again in the 1920's. But in the early teens over 100 years ago Haverford Twp. began building faster than anywhere else in Delco, one of the main reasons was two new golf courses including Lower Merion. Also new trolley lines etc. As you see below, prices in Haverford Twp. jumped like no were else in Delco.

No other suburban section of Philadelphia has experienced such a remarkable development in the last five years as Haverford Township in Delaware County.  The effect of this rapid development is strikingly reflected in the value of ground all through the township.  Hundreds of acres which could have been purchased within the last five years at from $1000 to $2000 per acre have doubled in price in that time, and the value of desirable ground is still steadily advancing.  The new golf course of the Merion Cricket Club, which is now completed, together with a second golf course of 18 holes, has greatly stimulated development in the vicinity.  The Haverford Development Company is the owner of a large tract of about 230 acres adjoining the course, which is being sold in acreage lots from $6000 to $7000 per acre.  A considerable part of this ground a little over five years ago was farm land, though of an expensive character, at prices ranging from $2000 to $3000 per acre and even higher were asked for it.  The Haverford Development Company paid as high as $4000 per acre for some of the ground, which it now has under development.

MANY FINE RESIDENCES – Hundreds of the finest residences in the suburbs line Montgomery Avenue, which runs direct through the center of the township.  In this vicinity ground has been sold in recent years as high as $25,000 per acre.  A considerable part of the 27-acre tract on Montgomery Avenue, which was purchased about four years ago by A. A. Hirst, has been sold at prices close to $20,000 per acre.  Mr. Hirst paid about $300,000 for the tract, which was considered at that time a record price for Haverford ground.

Paralleling the main line of the Pennsylvania Railroad and running west of that road to Ardmore, there are a series of suburban developments which afford the man of modest means who desires to live in the country, an opportunity to secure a country home without the prohibitive cost imposed by a choice in the more exclusive sections of Haverford, Llanerch and Brookline are two of the most thriving of these settlements, the increase in the population of both having been so marked in recent years that the township commissioners have recently built three handsome new school houses, one at Brookline, which will accommodate the children from Brookfield estates Penfield, Beechwood, Llanerch Manor and South Ardmore; another at Llanerch, which will take the place of the old school, which was much too small and a third high school building at Oakmont, which cost about $100,000.  The latter suburb is less than fifteen minutes’ walk from Brookline.

DEVELOPMENT AT OAKMONT – The development along the line of the Philadelphia & Western Railway which intersects the lower part of Haverford Township, has been slow till within the past two or three years, but has now started in with a rush.  Thriving and handsome suburban settlements are springing up along the line of the electric railway close by the stations.  There have been several large sales of ground near Oakmont station in which the prices paid have disclosed an astonishing increase in the value of ground since the section ceased to known as Grassland about three or four years ago.  Prices in this section have almost tripled in a few years, and the development which is evidently due has only just begun.  A number of pretty suburban homes have been built at Oakmont and more are planned to be built during the coming summer.

Much ground in the vicinity of the station, as yet undeveloped, is being held at from $4000 to $5000 per acre, while no lots in Oakmont, it is believed, can be purchased at less than $6000 per acre.  The Ardmore and Llanerch branch of the West Chester trolley line, which runs from 69th street to Ardmore, has also done much for the development of this section.  It is considered one of the best equipped trolley lines in any part of the suburbs.

MONTGOMERY AVENUE RESIDENCES – In the most exclusive section of Haverford are some of the finest dwellings, which are to be found in the suburbs of any American city.  One of the finest of these is the residence of Thomas P. Hunter, on Montgomery Avenue, which occupies the site of the old Wallace residence, which with about five acres of ground, was purchased a few years ago for $125,000.  This price represented only the figure paid for the ground, as the old Wallace residence was torn down by the new owner and the present residence, which is said to have cost $200,000, built on the site.  The Hunter residence is the finest in Haverford, in a section of fine residences, and illustrates strikingly when compared with some of its neighbors, the process of development, which this suburban section is undergoing.  Another handsome structure which has been built at Haverford with the past three years is Haverford Court, a high-class apartment house which was at the time it was built considered more or less of an experiment, in a suburban section.  So great, however, has been the increase in population in Haverford in recent years that no trouble has been experienced in keeping Haverford Court filled since it was built. 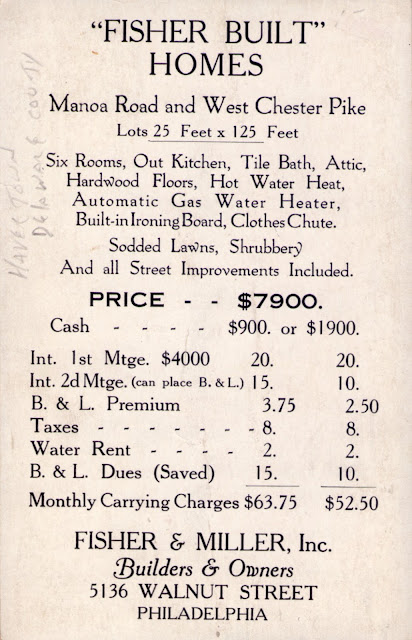 Posted by Delaware County History at 4:22 AM