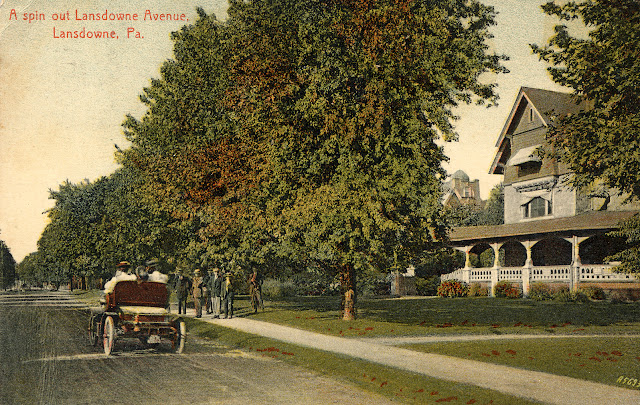 Need some help with this picture on Lansdowne Ave. Looking for and address
Thanks Keith

Note: One hundred plus years ago Delco as the home of some baseball players full time. Many MLB players have been born in Delco and then moved away, but some came here to live and stayed here.
full time. George Andrews of Prospect Park, Joe Cassidy of Chester etc. But Eddie Collins of Lansdowne was considered the best second baseman of his generation, his son, Eddie Collins Jr. born in Lansdowne played MLB in the 1940's. 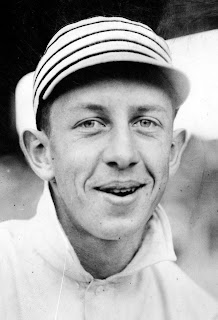 Eddie Collins
[1887-1951]
Collins was renowned for his intelligence, confidence, batting prowess and speed. He is one of only five players to steal six bases in a game, and the only person to do so twice, with both occurrences happening within eleven days, on September 11 and September 22, 1912 respectively.[7] He was part of the Athletics' "$100,000 infield" (and the highest-paid of the quartet) which propelled the team to four American League (AL) pennants and three World Series titles between 1910 and 1914.[8] He earned the league's Chalmers Award (early Most Valuable Player recognition) in 1914.

COLLINS OF LANSDOWNE GETS NEWSPAPER JURY’S VERDICT
All Eleven Votes Cast for Athletics Star for Second Base Position on All American
A jury of newspaper writers has paid Eddie Collins the splendid compliment of voting unanimously for him as second baseman of the all-American team being selected by the Boston Post.  Five players of the team have now been selected, of whom Walter Johnson and Collins each got all the eleven votes – one for each major league city.
Collins is the first member of the athletics to win a place on the combination, although Schang was second to Archer as the best catcher.  Plank was second to Rucker as the best “southpaw” twirler, and McInnis was second to Daubert as the pick of the first basemen.
Of the five selections to date three are National League players and two are American Leaguers.  Strangely enough the American League stars to win both are the only ones to be selected unanimously.
Some of the reasons why the writers picked Collins are interesting:
Jack Ryder of the Cincinnati Enquirer, writes:
“Collins is so far superior to any of his rivals on second base that discussion of a possible comparison is superfluous.  He is entitled to all the credit that can be tendered to him.”
Words of praise from Cleveland, where the great Lajole is the pride of the fans, are words of praise indeed.  Henry Edwards of the Cleveland Plain Dealer, writes of Collins:
“No second baseman in either big league can compare with the brilliant and versatile Eddie Collins.  “The keystone sack” is all that the name implies with Collins as its guardian.  In recent years only one player in my estimation has shown anything to compare with the work of the little Philadelphian, and I doubt if the great Lajole versatile as this brainiest player in Connie Mack’s brainy squad.
Bill Peet of the Washington Herald, calls Collins the “Walter Johnson of the infielders, inasmuch as he has no real rival.”
Irving Vaughan of the Chicago Record Herald says that “Collins stands without an equal in his position.”
E. A. Batchelor of the Detroit Free Press, writes that “Collins gets the call for second base, with nobody close enough to be seen with the naked eye.”
Tommy Rice of the Brooklyn Engle, declares that “Eddie Collins of the Mackmen, is so far superior to any other man who might be mentioned that argument is idle.”
So, it goes all along the line – Collins first, and the others nowhere.
CRAVATH DESERVES RAISE – Gavvy Cravath’s acceptance of terms to again play with the Phillies has rounded out Dooin’s team.  With Alexander and Seaton to hold down an opposing team and Cravath to drive in runs, the Phillies are mighty strong both on the defense and the offense.
Statistics for 1913 show that Cravath broke a National League record was held by Frank Schulte, of the Chicago Cubs.  It was 121 runs and was made in 1911.
Cravath last season drove in 129 runs.  In addition, Gavy scored 78 times himself, nineteen of his trips being on home run drives by himself.
Gravys record was:  Scored team mates 110 times; secured on home runs by himself 10 times, and scored himself 69 times in addition to his four-base clouts.  This gives Cravath a record of 188 runs that he either scored himself or to which he put the finishing touches.
During the season the entire Philadelphian team piled up 693 runs, so that Cravath figured in a trifle better than one out of every four tallies made by the Daisies in 19193.
This is an astonishing record for any slugger to make.  No wonder President Baer of the Phillies said that it was a pleasure for him to grant the terms asked by Cravath.


Posted by Delaware County History at 5:59 AM