Rose Valley Taxes etc. Nothing is open. Check out DCHPN link below and unk. Pic!! 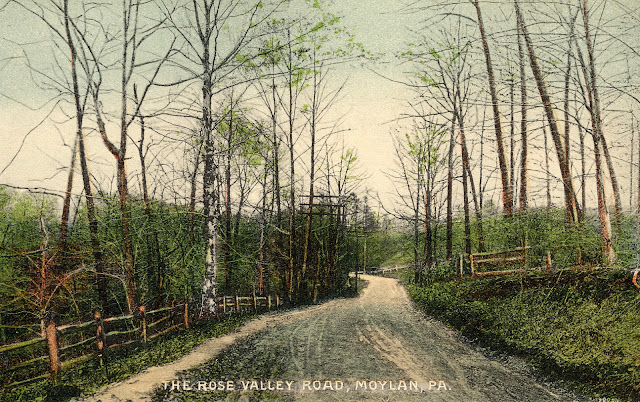 This postcard from about 1910 shows Rose Valley Rd. and how open the boro was at the time. The exact location of this picture is unknown.

Note: This article from 1930 is quite misleading looking to attract people to Rose Valley Boro. Rose Valley is not the smallest boro in Penna. and is not even the smallest boro in Delco, Rutledge is. William Price, one of the founders was a well known and respected architect and had his known ideas
with George Stephens on how to create a boro. They quickly split and Price had his own way. There were no school taxes in the boro because Rose Valley had a private school and residents paid tuition and not public school taxes. No sidewalks etc. to save money were Price ideas. 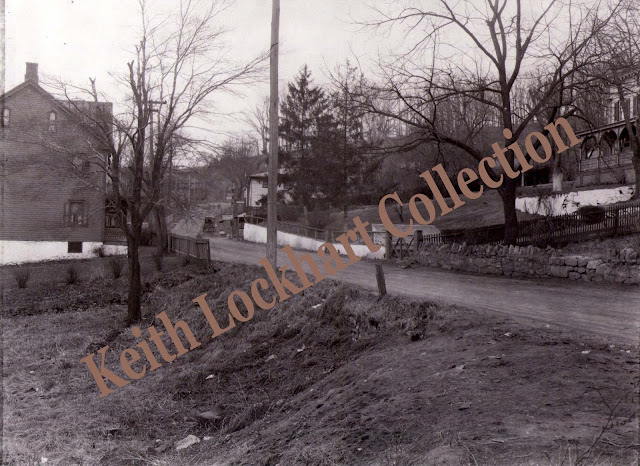 Another unknown picture from my collection. I believe it is the Aston area. Looking for a location.
Thanks Keith

The smallest borough in the United States, where there is no public school; where property owners are forbidden to lay sidewalks in front of their property; and where the borough council is composed of very wealthy men, exists in this county.
Rose Valley, three miles from Chester, with its population of 300, and its background of culture and art, is probably one of the most unique, as well as one of the most beautiful settlements in this State.
The colored chauffeur, of one of the borough’s wealthiest residents, the latter burgess, is the constable and as such represents the majesty of the law in the town.  Stores are absolutely forbidden, paved streets are banned, and for many years, the taxes collected have remained in a bank unused.
This modern Utopia was founded as a single tax colony in 1901 by William Price and Frank Stephens, but after several years, a difference in opinion regarding the management of the colony led to Stephens’ withdrawal.  He later went to Arden, Del., and there founded a single-tax colony and carried out his own ideas.
Price, however remained, a colony of painters, sculptors, and other devotees of the arts.  Two abandoned mills, each almost 200 years old, became the rendezvous for the Rose Valley Folks, as they call themselves, and meetings, plays, and social gatherings were held nightly in the old stone mills.
One day several years later, Jasper Deeter, a well-known actor, passed through the quaint settlement, and was struck by the beauty of one of the mills, and the idea of producing plays, with artistic rather than mercenary success in view, became imbedded in his mind.
With $9 in his pocket and countless ideas in his mind, Deeter started the Hedgerow Repertory Group, and in 1923 the first plays were presented to an audience consisting mainly of Philadelphia art lovers and residents of the Valley.  The company has continued successfully since that time, until today it is known throughout the country, and has numbered Ann Harding, Emerson Tracy, Eva LeGalliene, and Paul Robeson, amongst its players.
The theatre is perhaps the outstanding feature of Rose Valley, today, and the colony has gradually grown up around it, attracting numerous artists who now make the place their home.
In their efforts to retain the rustic atmosphere, the borough council of Rose Valley banned sidewalks, businesses of any description, and even pave d streets.  There is no public school within the borough limits, the children attending the Wallingford school.  When the residents wish to attend church they also have to leave the borough.
Arthur Rich, colored chauffeur for Maurice Bower Saul, millionaire attorney and burgess of the borough, is constable and the only law-enforcing officer in the borough.  What Rich does when he makes an arrest is problematical, for there is no magistrate to sentence his prisoner.
The residents emphatically state that they have no wish to modernize the borough, wishing to retain the quiet peaceful surroundings, which make the place one of the most unique of Philadelphia’s suburbs.


Posted by Delaware County History at 3:54 AM