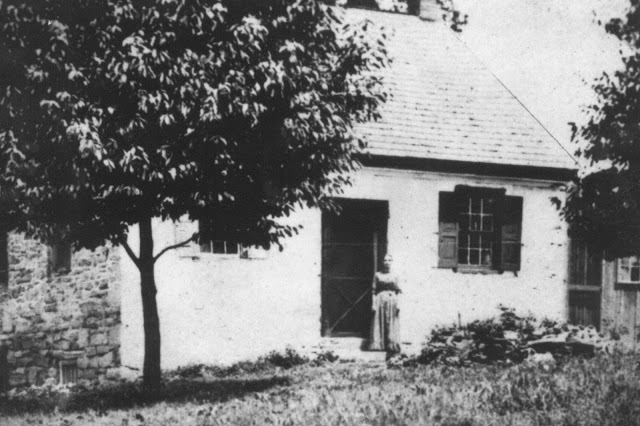 The first school built in Ridley Township about 1885. The school stands in the 300 block of W, Chester Pike in Ridley Park Boro. The school opened in 1800 and closed in 1872 when Leiperville school was built. The school district abandoned the school and Harriet Stowe pictured above moved in and after 25 years claimed the school as her own. Today it is a private home.

Note: One room school houses have always interested me and many still stand as homes. People pass this building everyday and have no idea it was a one room school. This was built as a "subscription" school. Local farmers "subscribed" or gave money to have the school built. The Penna. School Act did not become law till 1835 when school districts etc were formed.

The records are well preserved, although yellow with age.  The writing is plain and legible and can be read without difficulty and bears the date of July 25, 1800.  It was on that date that the deed of trust and conveyance of the ground in Ridley Township was made by Caleb Davis and wife to Abraham Trimble, Jeremiah McIlvain and Nathaniel Worrall in consideration of the sum of five shillings for the use of the inhabitants of the township and its vicinity in the education of the youth.
THE SUBSCRIBERS – The deed of indenture is witnessed by Isaac Eyre and Hannah Semmens and endorsed by twenty-six residents of the township who subscribed money for the school building.  The subscribers to that fund were:  William Paul, $20; Jeremiah McIlvain, $20; Abraham Trimble, $30; John McIlvain, $30; James McIlvain, $30; Aaron Morton, $20; Jacob Pointer, $30; James Maddock, $5; Nathaniel Worrall, $30; Hugh McIlvain, $5; Henry Trimble, $5; Isaac McIlvain, $10; Caleb Davis, $40; Thomas Price, $5; William Beatty, $5; Michael Rowe, $5; Rachael Effinger, $5; Isaac Worrall, $5; George Jordan, $25; Peter Revel, $5; Daniel Lampleigh, $5; Robert Ravanport, $5; Jesse Worrall, $6; total $346.  James Barnard was Recorder of Deeds at that time and his name is attached to the acknowledgment of the deed.
The minutes of the first meeting held to take into consideration the erection of the school house show that twelve of these subscribers were present.  William Paul was chosen president and Aaron Morton was elected secretary.  A resolution was adopted that after having taken into consideration the property of building a school house on the lot of ground granted by Isaac Culin for that purpose they considered it unfit for that purpose, whereupon Caleb Davis, Esq., proposed to give forty-two perches of ground on the North side of the great road adjoining the lot now occupied by Peter Norbury, which was unanimously agreed by said meeting to be accepted.
THE SCHOOL IS BUILT – At an adjourned meeting held on the seventh month, 1800, three managers to build the school house were chosen by ballot, those elected being Caleb Davis, William Paul and John McIlvain.  These managers were authorized to build the school house of the size and construction they saw proper.  Five trustees to the school were also appointed at this meeting, their names being Peter Hill, Caleb Davis, William Paul, Abraham Trimble and James McIlvain.  The trustees were authorized and enjoined to employ a suitable tutor for the school and furnish him with a list of the names of the subscribers to the school house and such others as they thought proper.  They were also instructed to visit and examine into the state and decorum of the school once a month and keep a record of the visits and if the tutor did not suit to discharge him.  It also decided that if there was any surplus after the building was erected, it was to be used to purchase books for the use of the poor of the school.
THE TEACHER’S TROUBLES – The minutes show that the first teacher employed to teach the young ideas of Ridley Township how to shoot was Jacob Fenton, A.B., who presented a diploma from Dartmouth College, New Hampshire.  His salary was $2 a quarter for each scholar and he began his duties on the 20th day of the 10th month in the same year 1800.  He was also allowed a reasonable charge for wood and ink, the minute’s record.
At the next meeting off the trustees it is stated that complaint was made that the tutor sent his bills to the subscribers before they became due and that he had overcharged them for the amount of schooling.  The teacher was interviewed, admitted his mistake and things went along all right for that quarter.
When the proposals for the second quarter were sent to the teacher he rejected them and intimated that he would run the school in defiance of the trustees and refused to give up the key.  A meeting of the subscribers was called and the outcome was the election of another teacher in the person of William Fairlamb.  His connection with the school was of short duration and from a casual perusal of the minutes there is every indication that the teachers of those days did not have a very smooth road to travel with the farmer’s boys.  Samuel Lytle was the next teacher employed and thirty-six scholars were enrolled.  His mode of teaching did not please the trustees and they said of him:  “We cannot entirely appropriate the conduct of the Master.”  The last teacher recorded is a Mr. Burrows and the attendance of scholars was dwindled down to fifteen.

Note: In doing research on schools, I was always confused by the number of school buildings in Delco and teachers etc. Things never added up. Reading this article straightened me out. Can you see what I'm talking about?

Posted by Delaware County History at 4:49 AM