Bicycle Wars and a Happy New Year to all!! 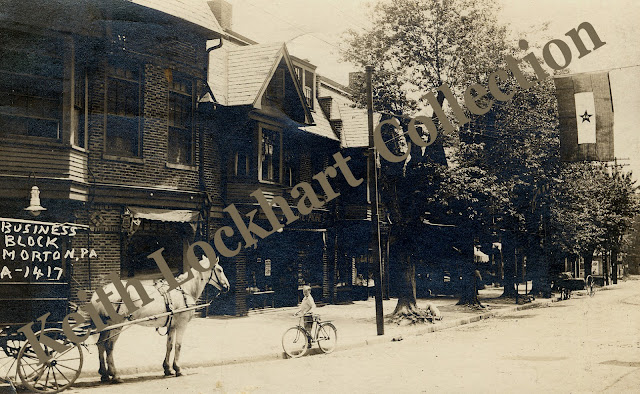 This picture of the Morton Ave, business district in the boro of Morton from c. 1923 shows what it was like then. Bicycles, horse and wagon, cars and yes trolleys too. Plus no traffic lights etc.

Note: On May 10, 1884 Samuel Clemens aka Mark Twain rode a bike for the first time. After that ride, he rode a bike constantly and pushed his readers etc. to ride a bike also. Bike riding became a national craze with bike clubs and organizations formed thru out the United States. By the mid 1890's bike groups carried a lot of political clout. Below  a local group went after the Telford Rd. Co. aka Chester Pike then a private toll road. It is hard to understand today but 120 years ago major roads were dirt and they were no lights or stop signs. Plus on the roads were horses, buggies, cars, trolleys and bikes. Riding a bike then was pretty scary!!

The Organized Wheelmen Are Fighting the Telford Road – The L.A.W. Will Also Act

The war which the Chester Bicycle Club has inaugurated against the Chester and Darby Telford Road promises to spread through all of the cycler’s organizations and it is said that the League of American Wheelmen will shortly issue a bulletin taking cognizance of the alleged unfairness of the company toward wheelmen.  The Chester Bicycle Club, until this year, paid the Telford Road Company an annual fee of seventy-five dollars and in consideration of this fact all members of the cub were privileged to ride on the pike without paying toll at the six tollgates.  This was very convenient to the members and the pike was used a great deal by the wheelmen of this city and by the visiting clubs which rode to Chester during the cycling season. But this year the officers of the Telford Road Company concluded that it was worth at least three hundred dollars to the Bicycle Club to have the privileges of the pike, and so raised the figures of the annual charge to that amount.  The bicycle people had expected to pay an increased rate, as the membership of the club has increased, but were staggered when they learned that this year’s rate was to be four times the amount paid last year.  The club very promptly decided not to pay what they considered was an outrageous charge and determined to get along as far as possible without using the pike.

The fight will not end here, however, as the bicycle clubs in Philadelphia and the great national organization, the League of American Wheelmen, have taken the matter up and all members will be warned of the high toll rates charged on the pike.  It is said that the new map of the State wheel routes, issued by the L.A.W. and which is authority for cyclers everywhere will show the route to Chester by way of the Island Road to Moore, and thence to Ridley Park by the Lake Road and to Chester from Crum Lynne by the pike.  This will necessitate passing only one tollgate on the pike and will save wheelmen five cents toll each way.  The result will make quite a difference to the Telford Road Company if the wheelmen carry out the war, as a great deal of revenue was derived from bicycles, and this has been constantly increasing.

The Island Road has been put in splendid condition by the supervisors of Tinicum Township and as it is very nearly level, wheelmen say that it is much more pleasant than the Telford Road.  By way of Penrose Ferry, this road connects with the smooth asphalt of Broad Street, Philadelphia and makes a very fine bicycle road.

The officers of the Telford Road Company say that they raised the charge on the bicycle clubs because they found by investigation that the members used the pike sufficiently to warrant the charges they have made.  In addition to the members, a great many others undoubtedly rode through the gates and by shouting “Chester” eluded the gatekeepers.  Now that no clubs are given special privileges, all wheelmen are stopped and dishonest riders have little chance of being successful in avoiding the toll.  The Telford people do not think the war will make any very great difference in the receipts of the road, as they say that the smooth surface of the pike is so enticing to wheelmen that they will ride that way whether the clubs boycott the road or not.

WOMEN WILL ASSIST – A representative of the Women’s Bicycle Club of this city which now numbers eighty members, says that an effort will be made to enlist the cooperation of all women riders to use their effort for the adoption of a new road between Chester and Philadelphia.  “We have paid our amount this year,” she said, “but next year we shall contribute this money toward the above object.  Each one of us is willing to pay one dollar for the establishment of the new route, so that the turnpike road will be boycotted.”


Posted by Delaware County History at 3:55 AM