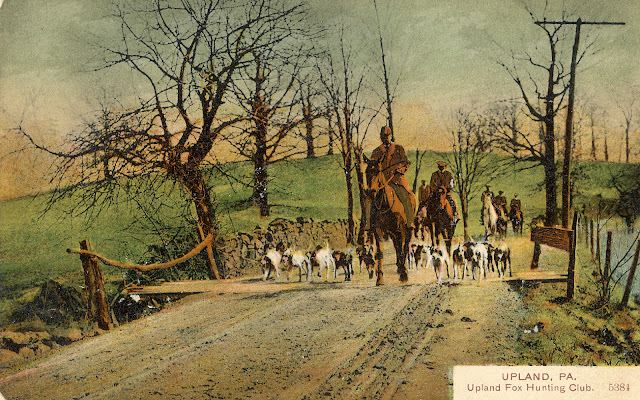 The above postcard is a very rare one of the Upland Fox Hunting Club from about 1906, The location is unknown. The cub was founded by Edward Crozer and was on land in Upland Boro and Chester Twp.

When all the Improvements are Completed and the Place Stocked, the Organization Will be Among the Leaders in the United States.

HIGH PRICED STOCK:  The kennels are being stocked with some of the most expensive hounds known to the fox hunters, hounds that are noted for their keenness of scent and endurance on the trail, and the expenditures for this branch of the club alone will go into hundreds of dollars, as the hounds are bred with the greatest care and attention.

PLACE WITH A HISTORY:  The land that has been purchased by the club has a very interesting history and is one of the oldest grants in the State.  The West house, which will be the club house, is being improved and this is associated with some very interesting events of colonial days.  An historic fireplace will be one of the things to be retained.

The Elias H. West farm, in Chester Township, just on the outskirts of Upland borough, is to be the headquarters of the Upland Fox Hunting Club, a charter for which was granted and signed by Judge Johnson, of the Delaware county Courts recently.  The property was recently acquired by Ex-Burgess Edward Crozer, a true sportsman and the one hundred and more acres which are included in the tract, are being improved, and will be transformed into one of the greatest and best hunting clubs in Pennsylvania, if not in the country.

Since Mr. Crozer and those allied with him launched the project, there have been a number of changed made to the spacious old farm house which has stood more than a century.  This is to be the clubhouse proper and will be fitted with everything for the perfect enjoyment of the members.

Its surroundings are beautiful and its situation just the thing for thorough enjoyment, that the best sportsmen demand.  Besides a number of new buildings, there are a series of kennels constructed which will be used for housing the hounds also stables, for the animals, which furnish the greater part of the huntsman’s delights.

The farm which is thus to be put to new uses, has been in the possession of the West family for many years.  The original West was a sheep fancier and as the former tract included several other of the adjacent arms, he called all of it, then in his possession, the “Shepherd’s Plans.”

During the colonial days, the old fire place that still exists in the West house was used as a place of punishment, by the masters for their slaves.  The fire place is a spacious one as compared with some modern day furnaces, and it is stated that the slaves were placed therein and a big board, constructed for the purpose, was placed in the front practically making a prison thereof.  This fireplace will be retained, it is understood, I the improvements made and in those contemplated.

H.G. Ashmead, in his history, gives the following account of the property which embraces the West tract:  “On March 29, 1684, three hundred and eighty-five acres of land were surveyed to Thomas Braksey which included all the land lying in Chester Creek, from Bridgewater to the western line of the borough of Upland, on which are now the farms of Stephen M. Trimble, Elias West and the property of William Maris, north of the Upland road, and part of that belonging to Joseph Engle, lying west of Edgemont road.

“That part of the farm of William Maris, south of Upland Road, and the farm of Abraham C. Lukins, part of the estate of Mary Kelley, and the remainder of Joseph Engle’s farm, was included in the patent of June 7, 1672 to Neals Mattson of one hundred and sixty-four acres, during the government under the Duke of York.  The remainder of the lands of the east side of Edgemont Road and the residue of the Kelley estate were on the land patented March 31, 1686 to James Sandelands.”

Posted by Delaware County History at 2:49 AM