The Suburb of Roses, Sunshine and Good Fellowship aka Drexel Hill !!! Events at the Colonial Plantation!! 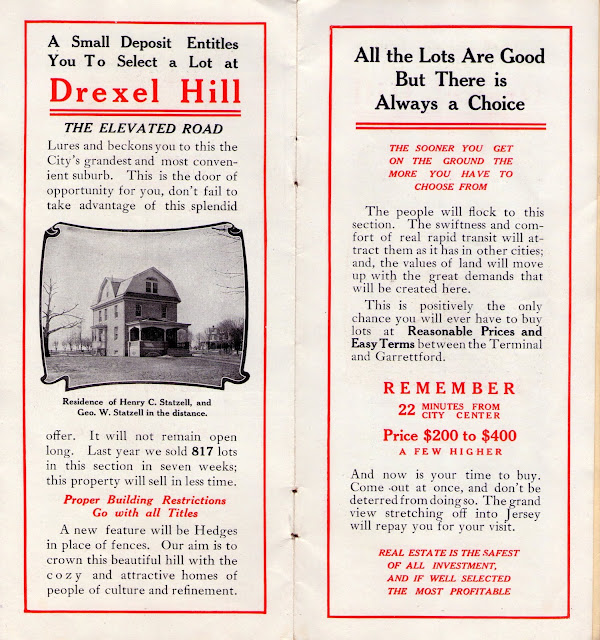 Above is part of a real estate brochure for Drexel Hill in Upper Darby Twp. from the 1920's. One of the big things realtors promoted was the "elevated railway" aka the trolley line from Phila. as a big reason to move to Drexel Hill. Another page of the brochure is below. Below that is a newspaper ad for Drexel Hill from March of 1922.

Note: Delaware County Real estate was selling like crazy in the 1920's especially in eastern Delaware Co. Places like Upper Darby were especially hot. Below is a newspaper advertisement, advertising Drexel Hill.  . 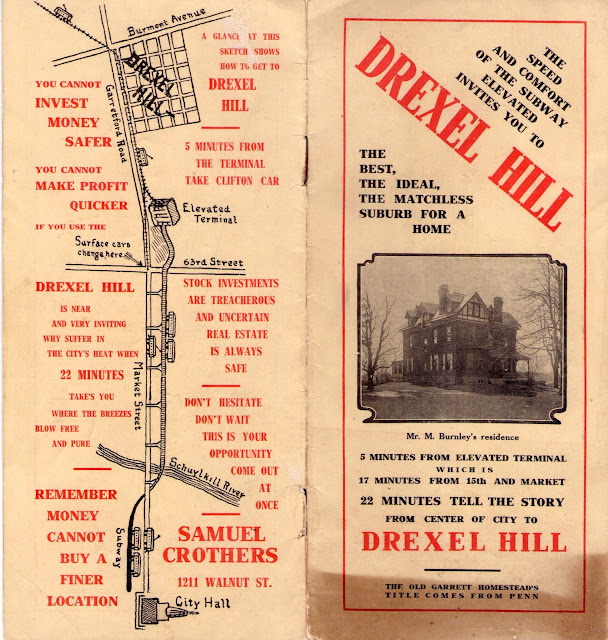 Own a home in Nature’s Playground

The Suburb of Roses, Sunshine and Good Fellowship

It epitomizes the advantages of DREXEL HILL, as you folk know them, in a manner that will attract the attention of hundreds of desirable people, who, during the coming months will be seeking homes outside the city.

The results already secured, this early in the year, are most gratifying; and but indicate what the future has in store for DREXEL HILL,

Every pleasant Sunday or Saturday afternoon, DREXEL HILL is going to be the Mecca of hundreds of city residents, who come to look, skeptical perhaps of the advertised beauties of our suburb, but many of whom will remain to purchase and to residue here, as soon as a home can be provided.

The beautiful streets of DREXEL HILL, with their wealth of trees, shrubbery, well-kept lawns, the air of contentment and prosperity that pervades the community, have their effect on the first-time visitor.

On Aronimink Tract work is being rushed as fast as human ingenuity will permit.  Our new office building is ready for occupancy, the larger quarters will permit us to increase our facilities for handling this rapidly expanding business.

The road from Aronimink Station to State Road has been temporarily closed that it may be surfaced, just as soon as the sewer and water pipes are laid.  Woodland Avenue, north of and paralleling the Media Short Line, has been graded, ready for early surfacing, from School Lane to our new office building.  On this street, five houses are already in process of completion.

Over $300,000 worth of property has been sold in Aronimink Tract.  A number of properties in the restricted business section have been sold, and in a short time several stores, among them a modern drug store, will be erected.  In about ten days’ time, operations will begin on the Hipple Place, now known as Aronimink Gardens.

A very gratifying feature of the development of DREXEL HILL is the return of former residents.  Mr. William C. Patterson, formerly of Maple Avenue, has bought close to $30,000 worth of property on State Road, where he will soon be occupying a new home.  Mr. Washington Cope, formerly a resident of Turner Avenue, is going to build on Woodland Avenue.

WELCOME THESE FORMER DREXELITES
BACK TO OUR SUBURB
Homes Like These Make Drexel Hill Delightful
Let’s All Boost for a Bigger and Better DREXEL HILL
Harry W. Koch

Posted by Delaware County History at 2:53 AM