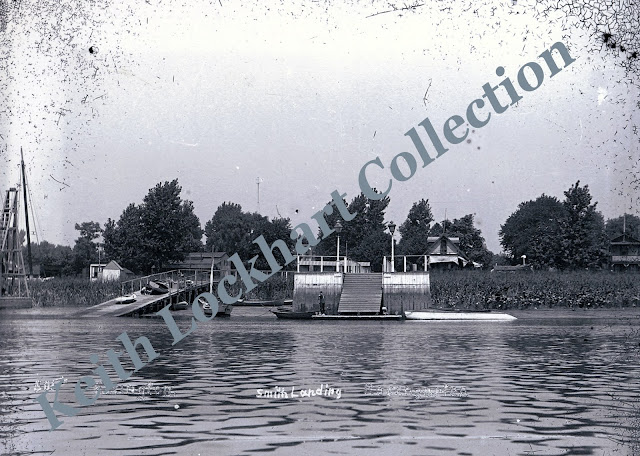 I was very lucky a number of years ago to get some glass plates of Tinicum from c.1900. This one I do not know the location and I have posted it before. It says "Smith's Landing". I have looked at maps, talked to people but still can't come up with a location in Tinicum. Any help would be appreciated.

Note: Tinicum was the place to party 120 years. Technically an island, it was the place to go for gambling, Sunday baseball etc. The problems went on for years till it was finally stopped by enforcement raids by Delaware County and Philadelphia in 1906. Below is an article about some of the problems.

Paper Now Receiving Signers for a Legal Movement Against the Invasion of Tinicum Island by the Hordes of Sabbath Desecrators, Whose Debauchery Has Aroused the Residents to Action to Protect Themselves Against Scenes of Indecency and Drunkenness in Which the Visitors Indulge – Threats Made Against People in the Crusade

Postmaster A.M. Diehl, ex-Justice of the Peace Charles Seiberling, George B. Reynolds, proprietor of the Yacht Restaurant, and other prominent and substantial citizens of Essington began yesterday to get up a petition praying the Court to instruct the officers of the law to live up to their duties, alleging that last Sunday when a crowd of five hundred or more people from the lower precincts of Philadelphia and Chester were violating the law in various ways, the officers of Essington, instead of making any attempt to stop the all-day disturbances, cohorted in a certain degree with the lawbreakers.

CRAP SHOOTERS IN EVIDENCE – The above gentlemen claim that a number of crap shooters, who were plying their nefarious game along the public highway, were told by the constable to get out of sight behind the bushes along the road.  They further allege that an official, ever accommodating in his manner, hired teams for the conveyance of the crowds from the trolley lines to the scene of the Sabbath Day desecration.  It is also claimed that one of the county officials was also in the vicinity, but made no attempt to make any arrests.

The head signers of the proposed petition also allege that a full-fledged bawdy house is conducted in a boat house in the locality of Smith’s field, and that among the patrons of the place are well known residents of Essington.

BASEBALL IN FULL SWING – Among the various attractions on Sunday was a game of baseball between a team managed by Lew Bailey, called the Broadway Club and the National Club the aggregations being composed of pugilists, who find contests on the diamond a pleasant diversion from the slugging that is necessarily infused in the manly art.

A large number of lewd women were numbered in the Philadelphia crowd and the language that was used by both sexes was unfit to hear by the Essington people who found it necessary to pass the high carnival to and fro from services in the Essington Protestant Episcopal Mission.

Mr. Reynolds had to secure assistance from neighbors to eject four intoxicated women from the porch of his Yacht Restaurant.  The women finding the porch a refreshing place to sleep off their booze, highly resented the attempts made to remove them and the language used was of the foulest character, being mingled with oaths.

During the baseball game, a fierce fight ensued between the rooters, one of whom picked up a bat and struck his opponent over the head.  The man lay unconscious on the ground for several minutes.  Other quarrels took place and the air was filled with oaths and ribald talk.

A GAMBLING DEN – Another place that the people of Essington will file complaint against is the headquarters of a local club not a thousand yards from the railroad station, where it is alleged a gambling den and drinking hole exists.  Sunday is a big day at this place and one walking along the road when the excitement is at its height can hear such remarks as

“Let’s have another drink.”

“Make mine a dark beer,” and other talk of a like character, which pollute the care of the good people of Essington, who are tired of being compelled to put up with this sort of thing and have decided to take the bull by the horns by bringing the attention to Judge Johnson to the Sabbath Day disorder.

THREATS ARE MADE – The Sunday desecrations boldly enter Charles Seiberling’s pasture field and milk his cows.  He made complaint once, but was told that if “he made too much of a holler” his cows would be all poisoned.

It is estimated that eleven beer wagons, hailing from Philadelphia and Chester, make weekly trips to Essington and that the beverage is stored ready for Sunday distribution in a boat house along Darby creek and above Essington.

New this year-Sunday Storytime! Join us the 3rd Sunday of every month from 12:00pm until 2:00pm we will be reading from a children's book, the children will then do a hands on activity, go on a behind the scenes farm tour and then you are welcome to picnic in our grove!

March 27th-Opening Day- The Colonial Pennsylvania Plantation will reopen March 27, 2021 for the opening of our 48th season! See all our farm animals especially our new Leicester Longwool sheep, Hog Island sheep, and Tamworth mixed breed pig. There will be hearth cooking, woodworking, long rifle demonstrations, spinning, weaving, working with flax, colonial music, candle making and seed planting. The ox will be yoked and the horse harnessed so some farm work can be completed. To purchase tickets or make a free member reservation
CLICK HERE


April 10th-Historic Timeline-Witness history throughout the ages from Europe to the Americas and from the 16th century to modern times. To purchase tickets or make a free member reservation CLICK HERE
Registration for reenactors is $5.00 for anyone 12 and older through April 1st. After April 1st, the registration fee is $10.00. Registration closes April 8th. The rain date is June 12th.

April 24th-Slavery and Servitude in Colonial Pennsylvania- Come and see how work was accomplished on our farm. This will be a day for children and adults alike. There will be hands on activities such as candle making and planting in the garden. Ned Hector will address slavery in the colony with his “Imaginary discussion with George Washington”. This 1:00 presentation is designed for grades 3 and up.

As well as a discussion on slavery, our volunteers will portray indentured servants, redemptioners, cottagers and poor free laborers. The blacksmith, rumored to have been a convict in his youth, will make and repairs items for the farm. Women will spin and knit to make some extra funds for their Quaker households. The farmers will take part in demonstrating a working ox and horse. It promises to be an educational enjoyable experience.To purchase tickets or make a free member reservation CLICK HERE

May 8th & May 15th-Sheep Shearing and Textiles-Come to the Plantation on Saturday, May 8th or Saturday, May 15th, and see our rare breed sheep lose their fleece. We will have Eva Mergen, one of our farmers, explain how to shear and then demonstrate the skill by using hand shears. We will also have people demonstrating most of the steps for turning that wool into cloth for clothing, and visitors will have an opportunity to card wool. We will explain how to care for sheep, what they eat, and the advantages of various breeds. There will also be a chance to learn about our other farm animals including our horses, ox, pigs, chickens, geese, and turkeys. There will be hearth cooking, garden, farm, and house tours. Check website for shearing times. Enjoy a day in the country that is very close to home. To purchase tickets or make a free member reservation
CLICK HERE

October 9th and October 10th-Medieval Days- To register as a reenactor, Click here


These are just our highlight events--"Friend" us on Facebook or Instagram to see last-minute additions and seasonal activities!

Posted by Delaware County History at 3:31 AM