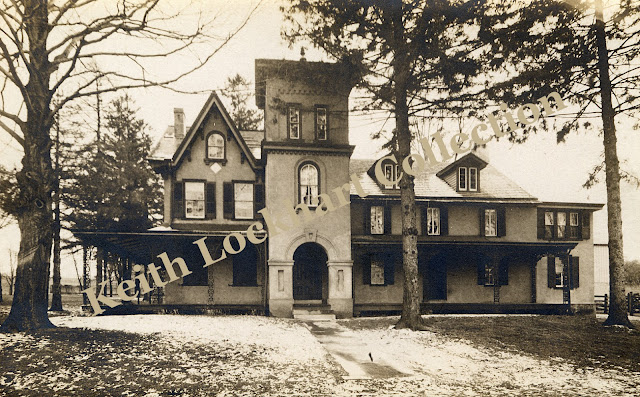 This is an unknown picture of a Chester Mansion in my collection. Looking for a location, owner, etc.
Thanks Keith

Note: One of the rarest books in my collection is the 1859/1860 Directory of Chester. It is the first one done. Nearly half of the book is devoted to a history of the borough, and there follows a list of streets, a directory of the people, facts about the churches, public schools, mails, trains, boats, secret societies, with the last twenty pages or more devoted to the advertisements of the business men of the town. At this time, Chester was just a small country town with a population of 4000.

THE BOROUGH GOVERNMENT – The Burgess at that time was Robert Gartside, John Brooks was the treasurer, James Riddle was Town Clerk and the following members were in the Borough Council; James Campbell, Joseph Ladomus, James Bell, John Larkin, Jr., Abram Blakeley, Dr. William Young, Benjamin Gartside, William Lear, Robert R. Dutton.  Council held its meeting on the first Monday in the month.  The tax duplicate for 1859 was $3,594.64 and the debt is $13,000.

George Weaver was the postmaster in the days of  1859 and the office was open from 7 in the morning until 7 in the evening.  The office was then on James (Third) Street below Market and two mails were received daily from points outside of the county.

The means of travel on the river was good in those days, as there were three steamers to Philadelphia and Wilmington daily in the summer season, two in the fall and spring and one in the winter.  Boats left the wharf at 7:30, 12 and 4.

The accommodations by railroad were not much to speak of, though the Chesterians thought they were being magnificently served.  Four trains a day each way were all that were needed for the passenger business of the Philadelphia, Wilmington and Baltimore Railroad in those days.

There were three building associations in the town – the Chester, Penn and the Washington, of which Fred J. Hinkson, Persifor Baker and Samuel H. Stevenson were the respective presidents.

SOCIETIES AND SCHOOLS – The secret societies comprised the following:  Chester Lodge, No. 236, Ancient York Masons; Chester Lodge, No. 92, Upland Lodge No. 253, Leiperville Lodge, No. 263, and Chester Encampment, No. 89, of the Order of Odd Fellows; Tuscarora Tribe, No. 29, Improved Order of Red Men; Washington Camp, No. 20, Junior Sons of America.

Anyone up for a dance?? See below 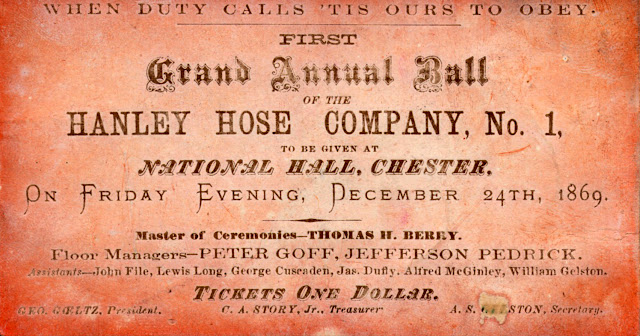 Posted by Delaware County History at 3:42 AM