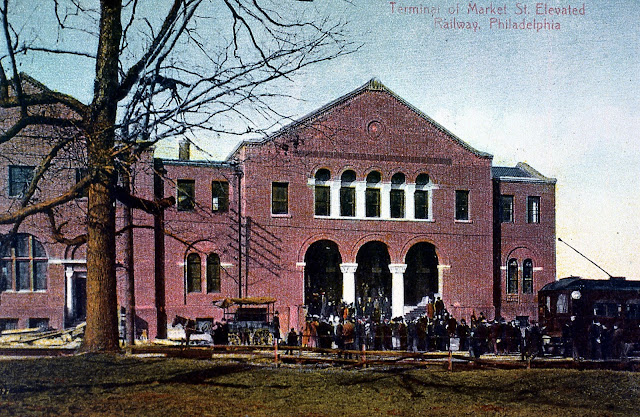 The original Upper Darby 69th Street Trolley Station about 1910 shortly after it was built. Note the horse and wagon in the picture.

Note: The Chester Times selected Upper Darby Twp. as the "Delco Model Twp." for all the improvements the Twp. was making 110 years ago!! At a time when Upper Darby and most of Delco were still farms some of the "model improvements" are very funny! Please read!! DCHS has restored the Abraham Lincoln Banner used by him in Media when he was running for president in 1860. Pictures are below, a great piece of Delco History Saved!!

Within a few weeks the township of Upper Darby will have municipal improvements which will keep pace with the progress of that rapidly growing district.  These improvements will consist of street lighting police protection and fire protection.  At the meeting of the Commissioners on Tuesday evening at the Fernwood Mansion at Fernwood, four policemen were appointed who will go on duty in a few weeks, giving the people in the different towns in the township proper police protection.  The officers will be mounted and will wear uniforms similar to those of the police of Lower Merion Township.  The officers will receive $80 per month, but they must buy and keep their own horse out of their salaries.
The Commissioners also made arrangements to install an electrical bureau over Davis drug store in Fernwood, where a thorough police and fire alarm system will be located.  This system will be installed by the Bell Telephone Company, and an operator will be on duty at all times.
TO LIGHT THE HIGHWAYS – At a former meeting of the Commissioners contracts were awarded for the installation of electric and street lighting throughout the township, and street lighting throughout the township, and the two companies which have the contracts are now busily engaged in erecting the electric light poles, stringing the necessary wires and the gas company is putting in iron posts for Welsbach gas lights.  Fire hydrants will also be installed within a short time.
The meeting was presided over by President Joel B. Jones, and Messrs. Frank Shee, John Taylor Wolfenden, William Shepley and George Wadas, members of the Board of Commissioners were present.  A. F. Damon, Jr., of Darby, was elected township engineer.  This is also a new office.  All these things go to prove that Upper Darby has a well-governed municipality with men at the helm who are wide awake and alive to what is needed for the people.  To accomplish these improvements has cost the Commissioners many hours of mental labor and they are being complimented for their service by the taxpayers of the township.
The officers appointed are:  Tomas Duffin of Fernwood; John Leighton of Garrettford; William Wogeman of Cardington and Daniel Logue of Keystone.


Posted by Delaware County History at 3:49 AM