Trolley Real Estate development in the 1920's!! Delco Sports legends book is out!! 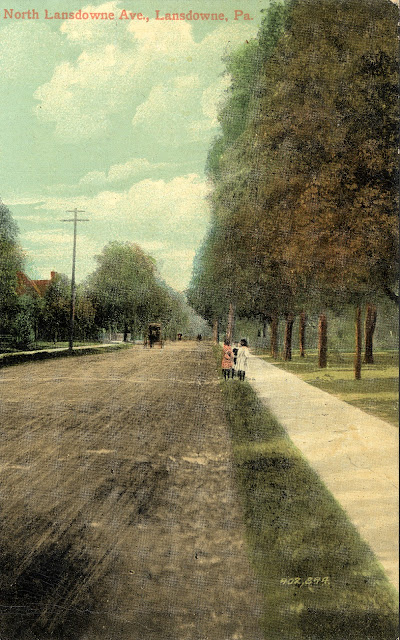 A postcard of N. Lansdowne Ave. looking north toward Garrett Rd. The exact location is unknown. This picture is from about 1910 when Lansdowne was still a "little country town".


Note: The article below is from the early 1920's, when trolley lines ruled eastern Delaware County and contributed to the 1920's building boom. Trolleys left 69th St. Terminal at that time and ran on Chester Pike, MacDade Blvd., Baltimore Pk. and West Chester Pike etc. including the routes today. The building boom lasted till 1929 and the depression. Please visit the trolley page on my website, delawarecountyhistory.com for more information.

Though Demand For Houses is Large, Prices Are Being Kept Down

Prospective home buyers will reap the benefits of the big building boom which is now under way, according to the consensus of opinion among the big builders of the county.
Notwithstanding the fact that the demand for homes at the present time is large, the number of homes going up all over the county is such that it will more than meet the demand.  In this way it is hoped to keep the prices of homes down to a level within the reach of the working man who is disposed to buy.
It is the working man, more so than any other class of people, who is desirous of owning his home.  Not in many years, according to builders and real estate men, has the everyday working man put in so many applications for the purchase of homes, as is the case at the present time.
Building and loan associations will also vouch for this statement, and the demand on these organizations for loans has been such that a number of new associations have been founded and conducted profitably.
The amount of building in the eastern end of the county, especially Upper Darby Township, continues at an exceedingly brisk pace.  Large tracts of what was formerly farm land are being developed as fast as grades are established and excavations made.  South of Bywood, on the big tract which runs from that community to the property line of St. Vincent’s Home, at the corner of Lansdowne Avenue and Garrett Road, one of the biggest building operations in the Township is now under way.  There is already a small town adjoining Bywood known as Beverly Hill, and so rapidly have the homes on this development been bought up and occupied that the Philadelphia and West Chester Traction Company has established a stop at the point, bearing the name of the development.
Right on down to the small stream known as Naylor’s Run, and up the Orphanage property line, operations are continuing.  Many big old trees had to be cut down and the stumps dynamited to make way for the building.
Streets are being cut through and all improvements, including cub and gutters are being laid as fast as the concrete is mixed.
With the completion of the work on Garrett Road from Sixty-Ninth Street to Lansdowne Avenue, it is expected that the large tracts abutting on the east side of the thoroughfare will soon witness big building operations.  This land is selling high, the old Powers estate, directly in the rear of the Upper Darby Township building is reported to be held for $20,000 per acre.
ACTIVITIES IN LANSDOWNE – In Lansdowne the erect ion of new homes is still continuing with slight change, despite the fact that many of Lansdowne erstwhile vacant tracts are now adorned with beautiful homes.
One of the big operations is that of W. Percival Johnson on Baltimore Avenue west of Windermere Avenue.
Here the old building known as the “Windermere” and which stood for many years in a frightfully dilapidated condition, is undergoing alterations of a most extensive character, and is rapidly taking on the appearance of an entirely new building which is practically will be when completed.
The old structure is being remodeled into an apartment house and according to reports, there will be nice, large and roomy apartments within its four walls.
A street has been cut through off Baltimore Avenue, south towards the railroad, and abutting on this new thoroughfare.  Builder Johnson plans to erect a number of pretty homes.
At a cost of approximately $250,000, the new Rolling Green Golf Club, situated on State Road above Springfield Road, in Springfield Township, will be laid out.  Work on the new project has already been started and will be pushed through as rapidly as possible.  The property of 177 acres was recently sold by John J. Dougherty of Sixty-Ninth Street to a number of Delaware County golf lovers.  The course will consist of 18 holes with what is expected to be the largest and most beautiful clubhouse in the county.
OPERATIONS IN MEDIA – Media is witnessing more building now than has ever been seen before in the town’s history.  New operations and alterations to old properties are going on almost unceasingly, and the county seat community is rapidly growing, both in the number of its homes as well as population.
Probably the largest building is the new apartment house going up on the corner of Olive and Jasper Streets, owned by W. Roger Fronefield and Howard M. Lutz, prominent lawyers.
Owen T. Hughes owns the garage building and apartment which is now being completed at the corner of Baltimore Pike and Providence Road.
George Schuchardt expects to remove into his new barber shop on Orange Street about Christmas.  The operation, which was begun a few weeks ago, it is understood, is an outlay of $10,000.
The Estate Development Company has renewed operations at Pine Ridge, laying sewers and cutting through streets.
J. W. Holton’s new homes on Lincoln Street at the foot of Orange Street, near Media station, are almost completed, there are about a dozen homes in this group.
Lavin Brothers are erecting two houses of two stories each on East Franklin Street near Providence Road.
Edward Snyder is building on South Avenue between Jefferson Street and Franklin Street.
Samuel Rhodes’ operation plans to erect fifteen new homes on his tract on Manchester Avenue.
James J. Boyer is building an apartment house and store building on East State Street.  There will be five rooms in the apartment.
Plans are now being completed for the new Wallingford Junior High School on Allen’s Hill overlooking the lower end of Nether Providence Township.  Work on the new institution will be begun just as soon as possible.

﻿
Posted by Delaware County History at 5:23 AM